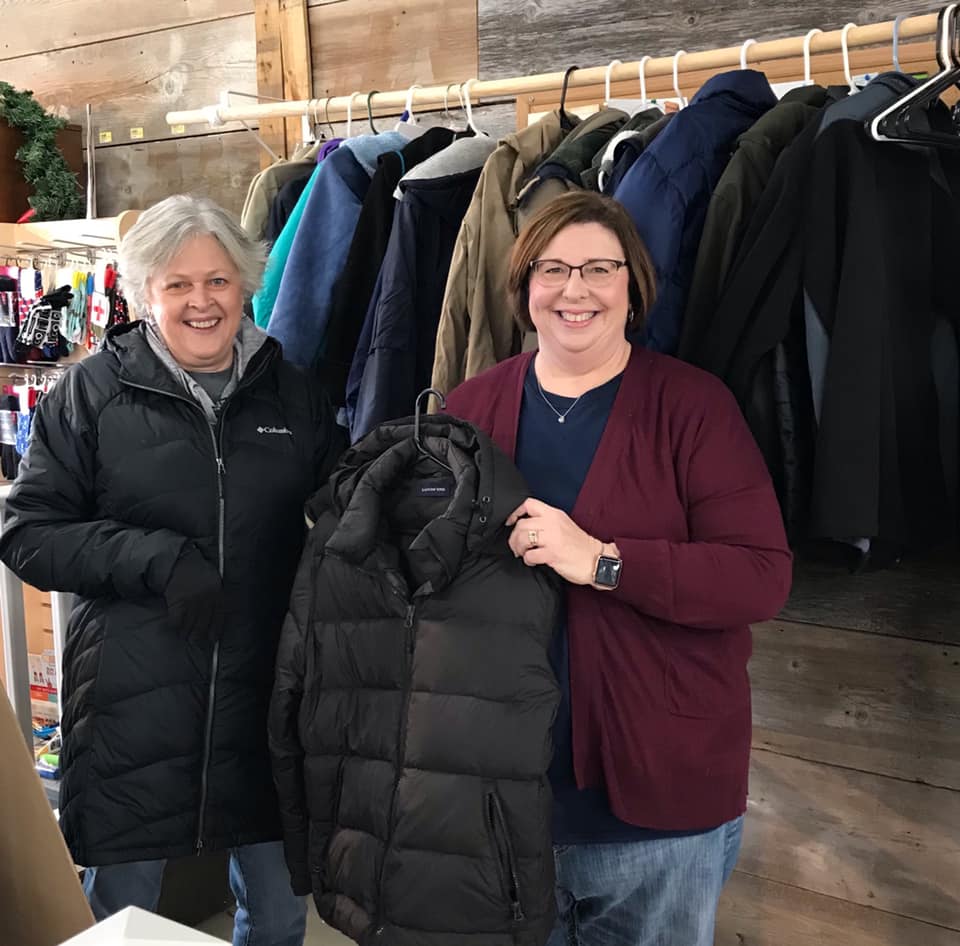 Barb Boley (left), president of the Keosauqua Chamber of Commerce, shows her support for the community coat drive started by Susan Wasko (right) of Wasko Hardware.»

Wasko Hardware in Keosauqua, Iowa, is demonstrating its ongoing commitment to meeting a wide range of community needs by creating a winter coat drive—with a twist.

Rather than just being a drop-off location for unused coats that would then get picked up, sorted and distributed elsewhere, Owner Susan Wasko saw an opportunity to streamline the process and meet peoples’ needs even faster as the temperatures dropped.

“We’ve created spots out front and just inside our store where customers and neighbors can drop off unused coats on a designated rack,” said Wasko. “If you have one to give, just hang it up. If you need one, stop by and pick out one on the rack—nothing to sign up for and no questions asked.”

The response so far has been strong, reports Wasko, with more than four dozen coats donated as of January 6. “We are so proud of our community for stepping up. Our community is wonderful,” she says.

Residents were encouraged to drop off clean, gently used spare coats for adults and children during store hours, The Do it Best retailer also has a box for hats, gloves and scarves.

“We ask that those be new due to the pandemic situation and of course the community has stepped up donating those items also,” she says.

Adults and children have both benefited from the coats. “Like everywhere else in America, we have been hit due to the pandemic and people have been out of jobs and need help. I am president of the Keosauqua Community Food Bank and we have seen our numbers continually rise for the clients that use the Food Bank,” Wasko points out.

She adds, “We are a small community—town population of 1,000 people—and we don’t have many resources where one can get a coat if needed. I had received a message from someone asking me to help their neighbor, as he is getting back on his feet. He goes out and cuts wood for his neighbors to make money. He has been cutting wood out in the Iowa winter with no coat as he didn’t have one and couldn’t afford one. I posted on my private Facebook page asking if anyone had a coat that they would be willing to donate to him and I received so many responses within 30 minutes. In fact, within 30 minutes he had two nice used coats and someone had ordered him a brand-new coat.”

Wasko continues, “Wasko Hardware gave him warm gloves and a nice warm Milwaukee stocking hat. By afternoon, I had so many people want to help that I came up with the idea of people donating their coats at Wasko Hardware and we would have a coat rack both inside and outside and whoever needed a coat can come get one. I keep one of the coat racks outside 24/7 in case they can’t get here during store hours or they may be embarrassed to walk in the store and get one.”

She points out that all this community support started with just a simple Facebook post, but she also emailed a news release to the local paper and the surrounding areas in hopes that if someone else needs a coat they can come to Wasko Hardware or perhaps give other communities this idea.

“The feedback I have received in person and on Facebook has been tremendous. People are so excited about this and are willing to donate and help. It warms my heart knowing that I’ve helped someone in need,” Wasko says.