You don’t have to be a rocket scientist to be successful at hardware retailing, but it sure helps, as Ben Honeycutt can attest.

Honeycutt served four and a half years in the U.S. Marine Corps in Iraq, Afghanistan and Japan, before he took a medical retirement. It was his background as an F/A-18 fighter jet engine mechanic that prepared him for his dream job—working at SpaceX to get rockets ready for launch. “I always wanted to work on rockets,” he says.

After four years at SpaceX, where he rose to lead launch technician overseeing 15-20 employees, and another 18 months at Firefly Aerospace at Vandenberg Air Force Base, Honeycutt was ready for a new challenge by 2020. “SpaceX was very demanding. I was working 12 to 15 hours a day with a lot of travel,” he notes. 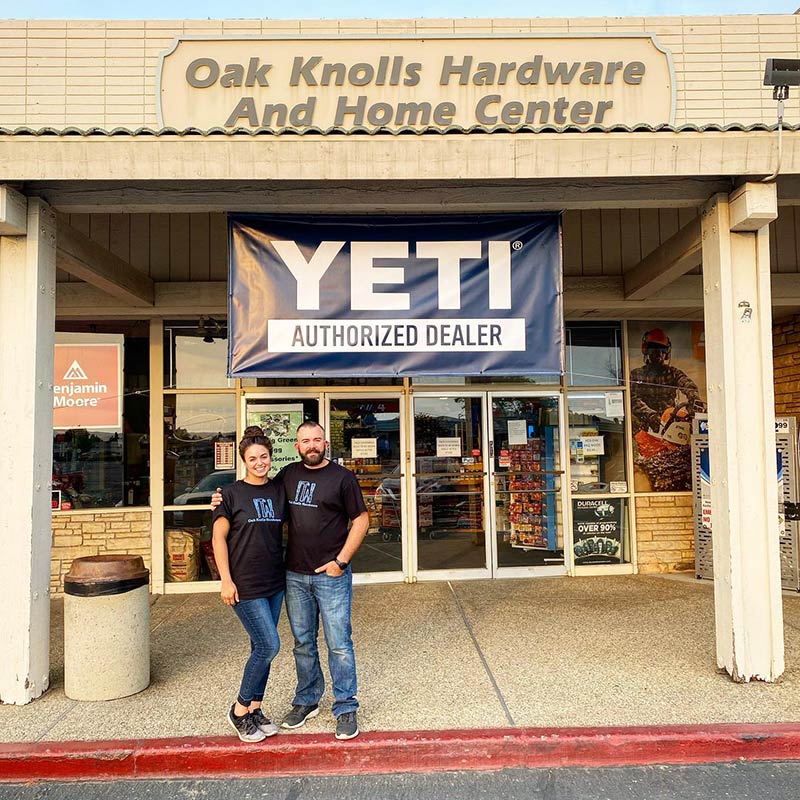 Ben and Alyssa Honeycutt have quickly taken Oak Knolls Hardware to new heights since taking over in June 2020.» 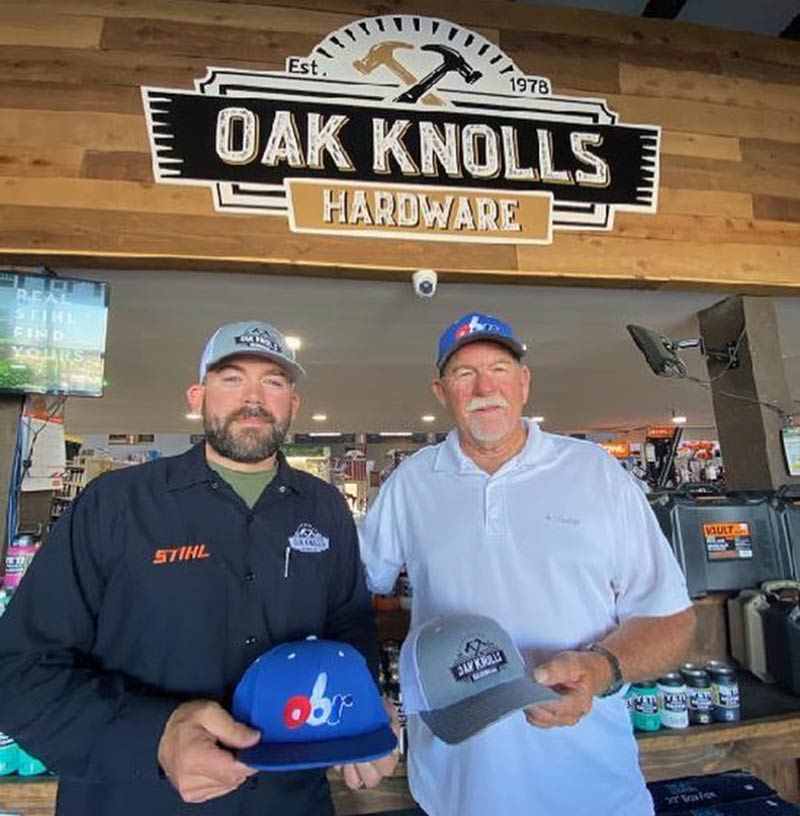 The next time opportunity came knocking, it literally came from next door. “I had a neighbor who owned a hardware store who was looking to retire,” says Honeycutt, who saw the appeal of owning a hardware store that would allow him to be close to home and be his own boss.

With his past experiences giving him interesting perspective, Honeycutt also saw hardware retailing life as less pressure and stress. “I like to be able to put 100 percent into something and get rewarded,” he adds.

His wife, Alyssa, took some convincing of the benefits of owning a hardware store. As Honeycutt explains, “She was enjoying doing her own thing. She operates a wedding and events rental business.” Another option was to move back to Kansas, where Ben is from, and open an automotive shop. 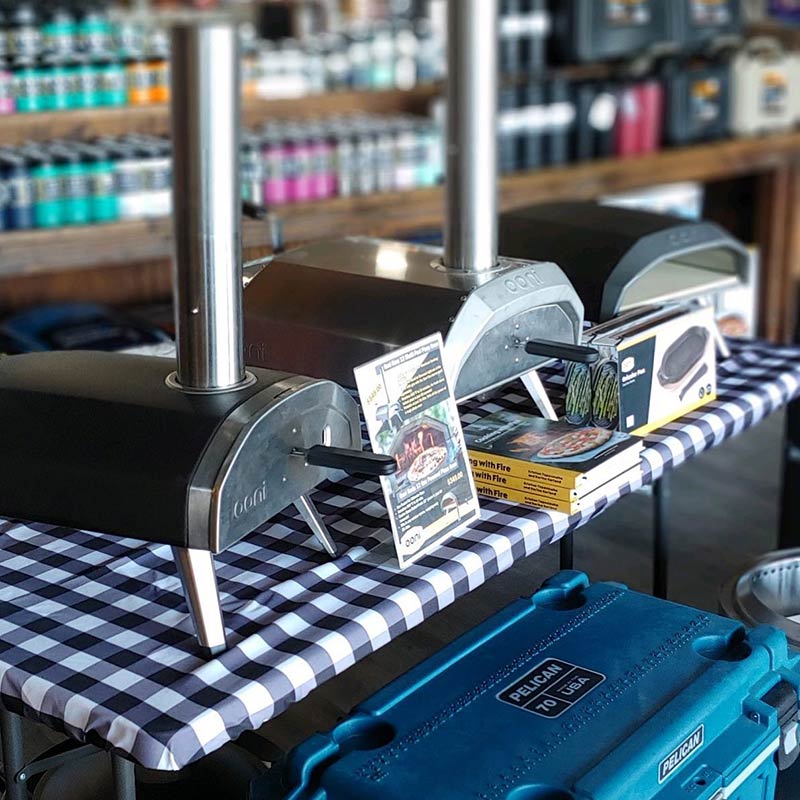 Portable pizza ovens have turned into a popular item.»

After weighing the pros and cons, the Honeycutts decided to take the plunge into hardware retailing. Then the pandemic interrupted. “We were supposed to close in March 2020 but held off due to the pandemic. We saw sales were high in March, April and May, so we went ahead and took over June 15, 2020,” Honeycutt says.

Oak Knolls Hardware in Orcutt, Calif., had opened in the late 1960s and converted to non-branded Ace in 1978. Ace was wanting them to sign a fully branded franchise agreement, but Honeycutt pivoted and switched to Do it Best to enjoy greater independence over decisions.

Taking over a retail hardware business in the middle of a pandemic is less than ideal. “It’s been tough. We’re still fighting supply chain issues and the cost of everything is going up,” Honeycutt says.

Furthermore, the store they were taking over was distressed. “We should have dug more into the inventory when we bought it, as there was about $50,000 less inventory than we expected. The wall colors were ugly. The floor was bad. It was overpriced,” he says.

These were not insurmountable problems, and less daunting than trying to figure out how to get a rocket safely into space or navigate a war zone in Afghanistan. 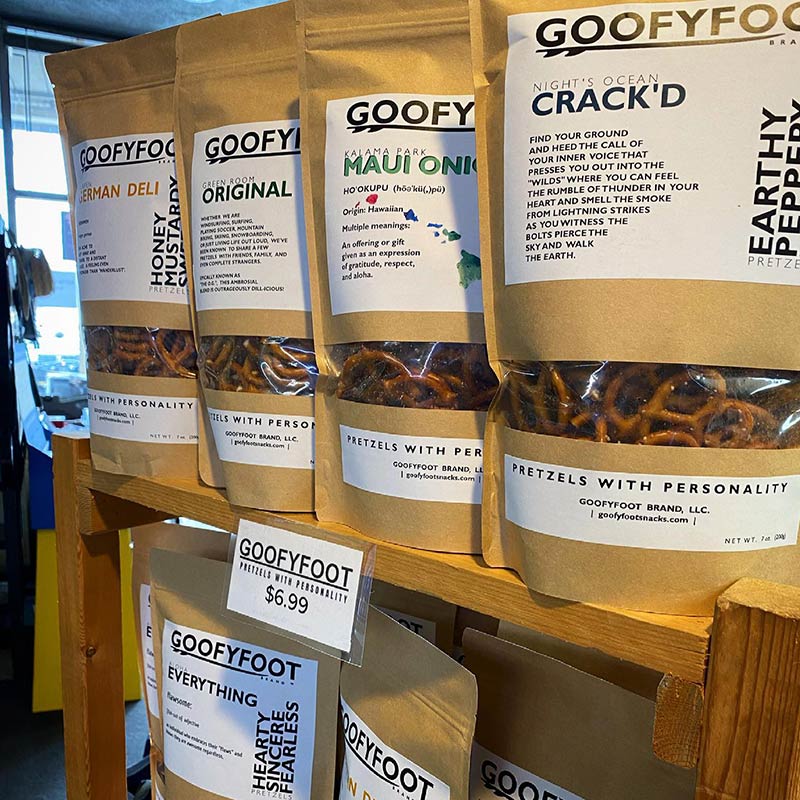 Goofyfoot Pretzels sell out as fast as they can get them in stock.»

Owner Ben Honeycutt installed new flooring by himself after hours to give the store a fresh new look.»

Honeycutt got right to work. He painted the whole store, upgraded electronics and installed new lighting and flooring. The flooring took three weeks, while the painting took a week. “I did it all myself. I remodeled the entire store after hours,” Honeycutt says. “I would work from 6 at night until 1 in the morning, then come back and open up the store.”

He is still upgrading things, such as the touchscreen POS monitor he just installed. The goal is to streamline processes. “That’s what I did the last two years at SpaceX—save time and money without cutting corners,” he says. Alyssa takes care of all the marketing for the store, while he takes care of everything else.

Bluetooth scanners are handy to scan items, while the touchscreen monitor makes it easier to serve customers. “I put in all-new shelving for screen repair and organized it so we know what we need. There are now location codes for everything in the store—everything has a place. I will continue to streamline and automate more processes,” says Honeycutt. 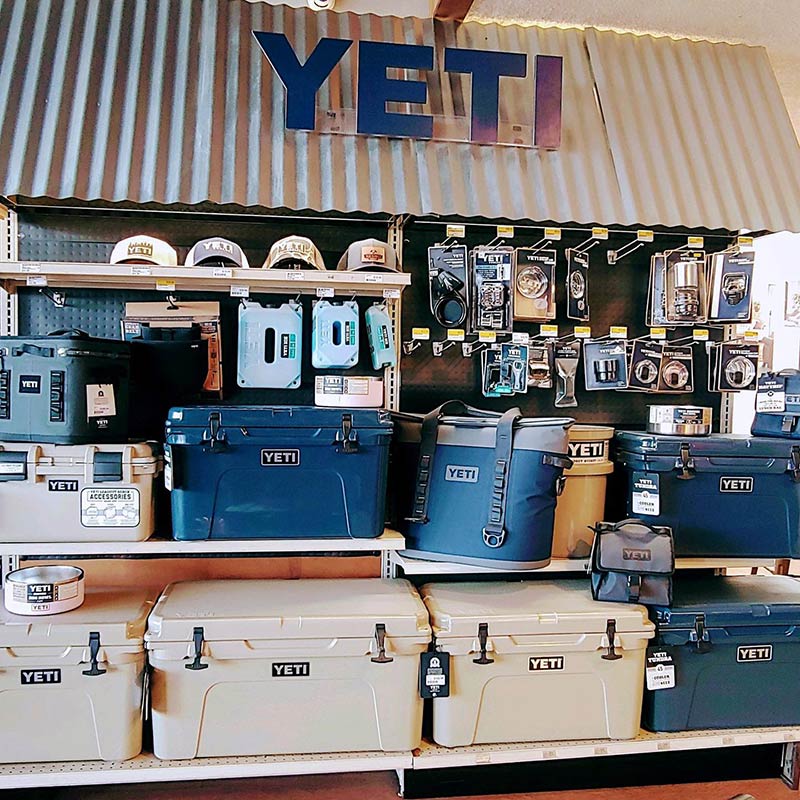 The store is an authorized dealer of YETI® products.»

Giving Back to Vets

As a proud Marine, Honeycutt has placed an emphasis on supporting programs that support veterans. “Kids, military and education are the only three things we support. That’s where we believe money should go,” he explains.

They held their grand opening on Veteran’s Day weekend and are turning that into an annual event. “The first year we bought enough food to do 1,000 sandwiches with bottled water and raffled off a lot of prizes. We ended up raising $3,000 to support Band of Brothers, which helps vets in need,” according to Honeycutt.

Last year’s event was way bigger. They had a Marine mobile RV that helps disabled vets. The local radio station did a remote broadcast, while a local musician played a couple of sets. They ended up raising $6,000 for Operation WEBS (Women Empowered Build Strong). That organization’s mission is to create safe and affordable, high quality housing solutions for women veterans to help them rebuild their lives. For Honeycutt, these events reinforced how impactful he could be as a hardware retailer. 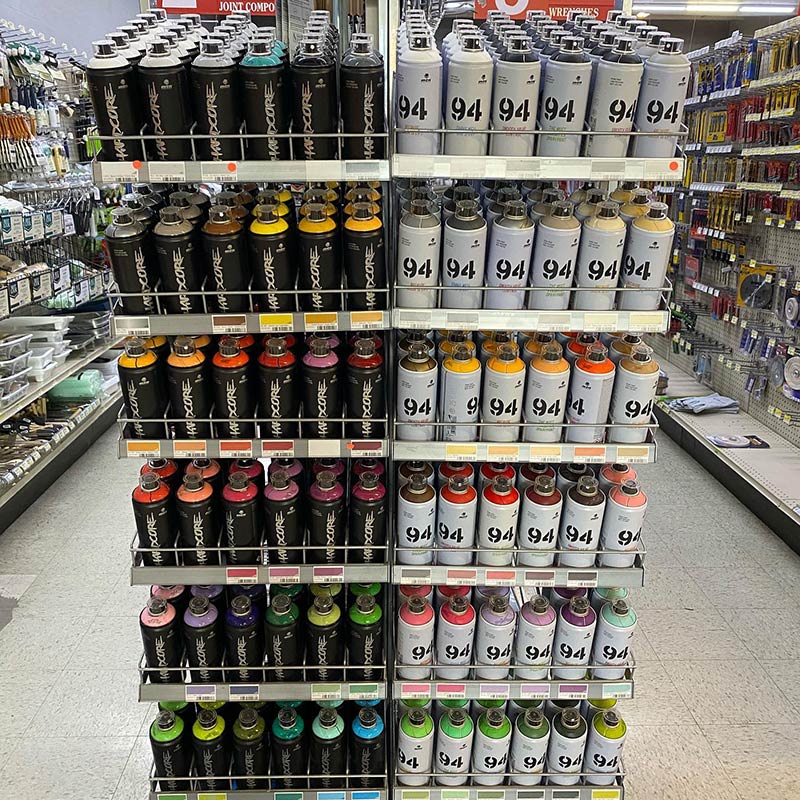 The assortment plan at Oak Knolls Hardware revolves around the needs of the community, such as MTN 94 spray paint from a Spanish manufacturer.»

“We do a lot for the community and look to generate community engagement, whether it’s the local high school or Little League baseball. Every hat we sell goes to support youth baseball—we raised $800 for that,” he says.

Honeycutt calls himself a people person, but he wants to ensure his employees do everything possible to provide exceptional customer service. “Every employee gets it beat into their head—when the customer walks in, you have to greet them nicely. If you need anything at all, let us know. People like that,” he says.

He is such a strong believer in their customer service, he is willing to put money on that promise—he gives out $5 store gift cards. There is a video posted on the store’s Facebook page with the following pledge: “When you make Oak Knolls Hardware your first stop and we can’t get what you need, we pay for your gas! We appreciate all the support from our community and want to thank you for always shopping with us first.” Click here to watch that video. 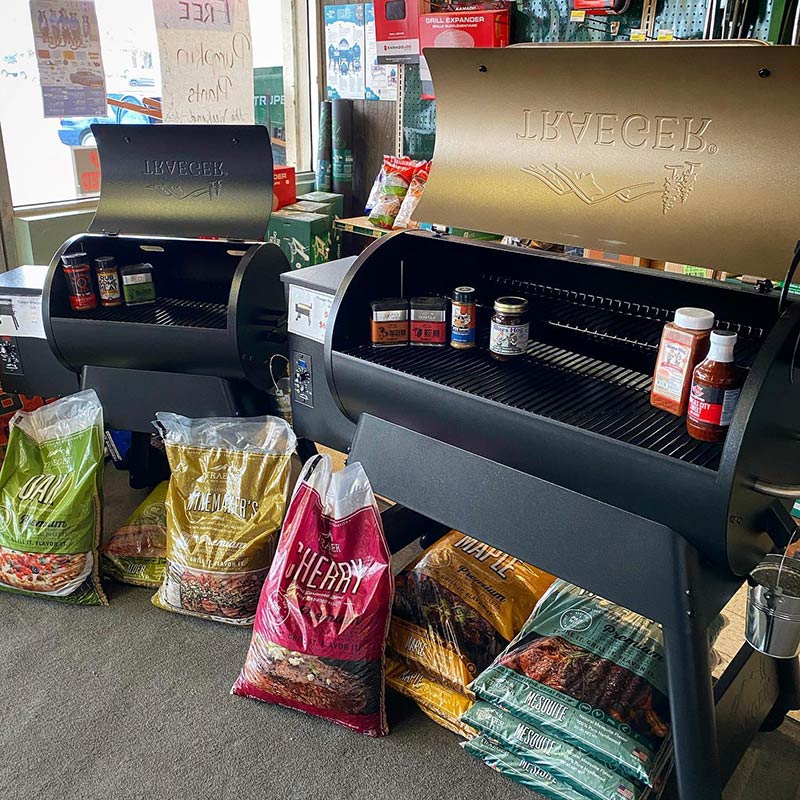 The store sold 40 Trager grills in November and December.»

Building for the Future

The store has a fresh new look, revamped operations and streamlined processes, but Honeycutt keeps running into another challenge—the 6,000-square-foot store is too small. “I don’t even have a loading dock. I’m trying to find a bigger location or looking at expanding this store,” he says.

There is an administrative suite for a charter school next door that could provide an extra 2,000 square feet if that space becomes available. “I would bring in more STIHL equipment, nuts and bolts, and focus more on outdoor stuff and grills,” Honeycutt says.

Current top sellers include GCI rocking chairs and gopher traps—he sells 2,000-3,000 gopher traps each year. “My number one thing now is Goofyfoot Pretzels from Olympia, Washington. We sold 500 bags in one week. I ordered 1,000 more and they were gone in two weeks,” he reports.

Make sure you have what customers want and need and sell it to them with a smile—a simple formula for retail success that the Honeycutts are learning to execute. The store did $1 million in the first six months after they took over—a big uptick over the previous annual volume of $1.2 million—then posted sales of $1.9 million in 2021.

The Honeycutts just had their second child six months ago, so Honeycutt has a new mission to focus on now. “We hope to pass on this business someday to our kids, so we have to keep growing and improving it,” he says.