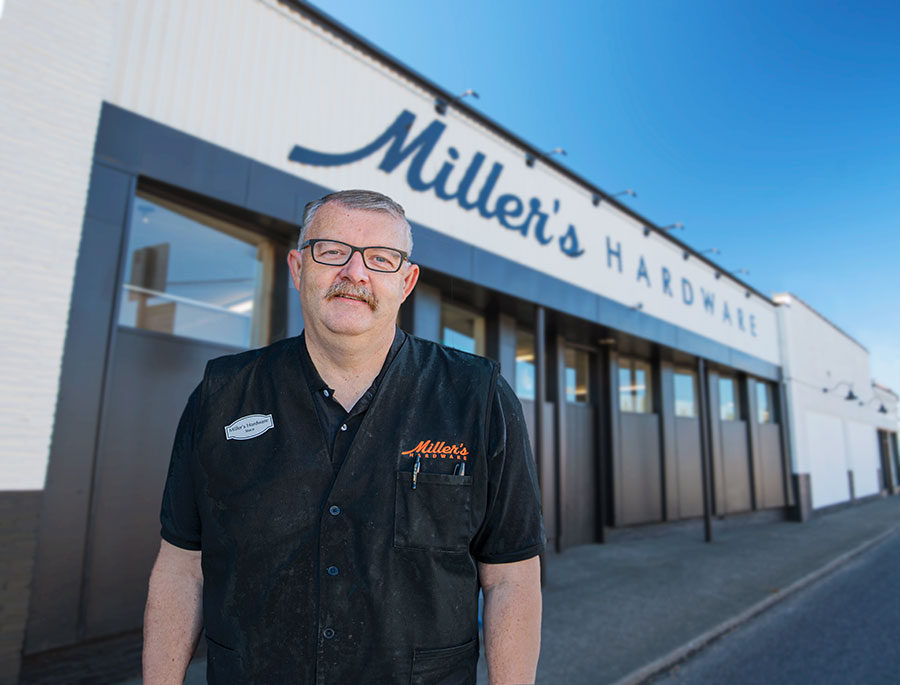 Stace Heston is excited about the prospects for future growth after taking over an iconic store in Spokane, Wash., that had fallen on hard times and closed for five months.»

In early spring, the doors at Miller’s Do it Best Hardware in Spokane, Wash., were locked, the lights shut off, the register till empty. Once a staple of Spokane’s South Hill neighborhood since it opened in 1951, the store had fallen into disrepair over the years. The iconic hardware store, known for assisting its patrons with outstanding customer service and a mom-and-pop atmosphere, had seemingly shut its doors for good in March.

As luck would have it, a savior lived a mile away. When Stace Heston heard that the previous owner was open to selling the store, he was immediately interested. He often drove by the building on East 29th Avenue and felt pulled by the opportunity. He immediately began envisioning what he could do with the business with wisdom gleaned from a lifetime spent in the hardware industry. 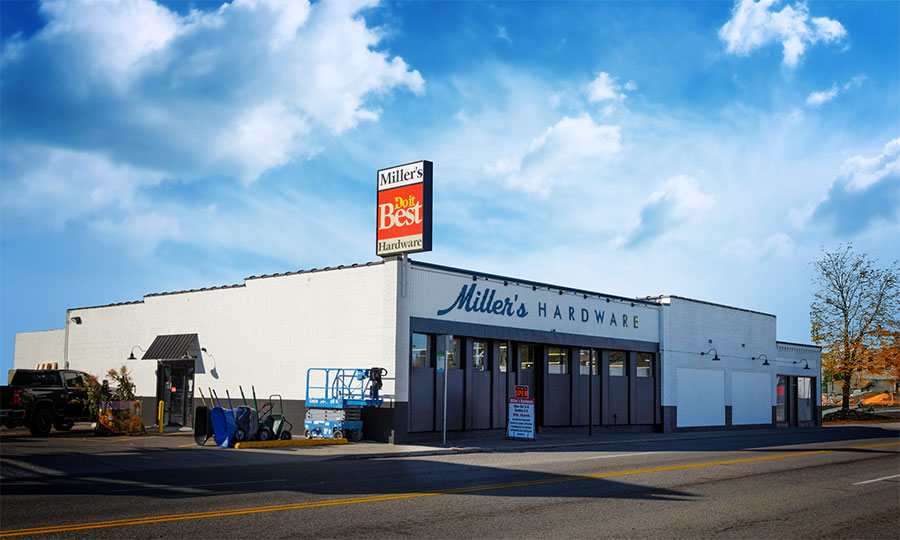 The reopening of Miller’s Do it Best Hardware has re-energized the community.»

Heston had spent 18 years as a market development manager for Ace Hardware, with responsibility for Ace stores in Washington state. He had helped open 145 new Ace stores across the country, but had left his corporate job with Ace in fall 2018 so he could buy Spokane Ace Hardware.

Adding to the appeal of a move from just south of Seattle to Spokane was the fact Heston’s wife, Arlene, was from Spokane. They jumped at the opportunity to make the move, with Heston excited about the chance to execute his own personal vision instead of guiding others down the success path. “After a while, you want to do something for yourself,” he explains. “It felt like coming home.” 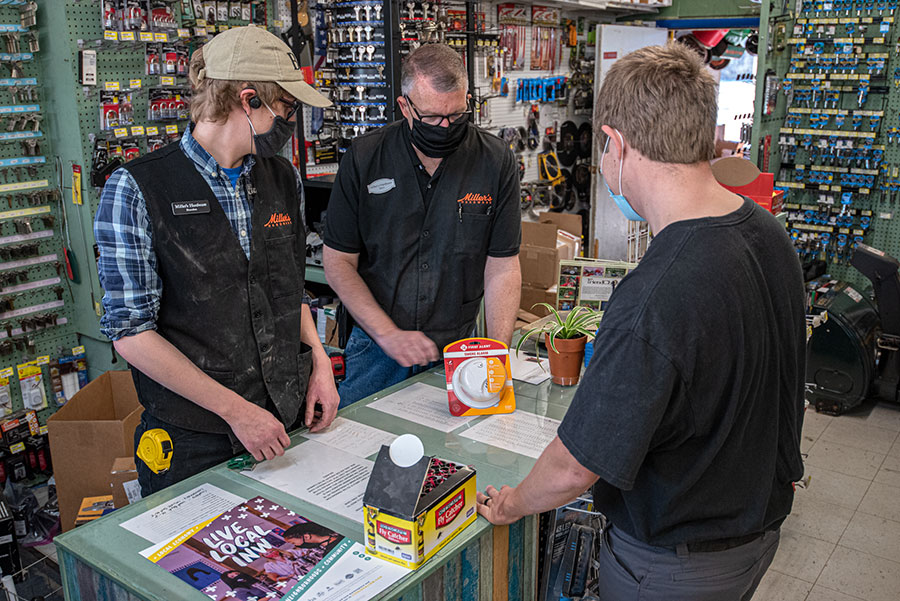 Owner Stace Heston (middle) is placing a strong emphasis on service to bring the store back to life.»

As he was settling in with Spokane Ace, Heston began talking with a customer who was the landlord for Miller’s Hardware. He learned the owner had medical issues and the store was being run by his girlfriend. “I had driven by Miller’s and been a customer, and I didn’t think the service was very great,” he recalls.

With no advance notice to the community, Miller’s Hardware ended up closing in March 2020, just as the pandemic was starting to kick in. Heston and his wife negotiated the sale and took over with a promise to keep the iconic name and history intact. 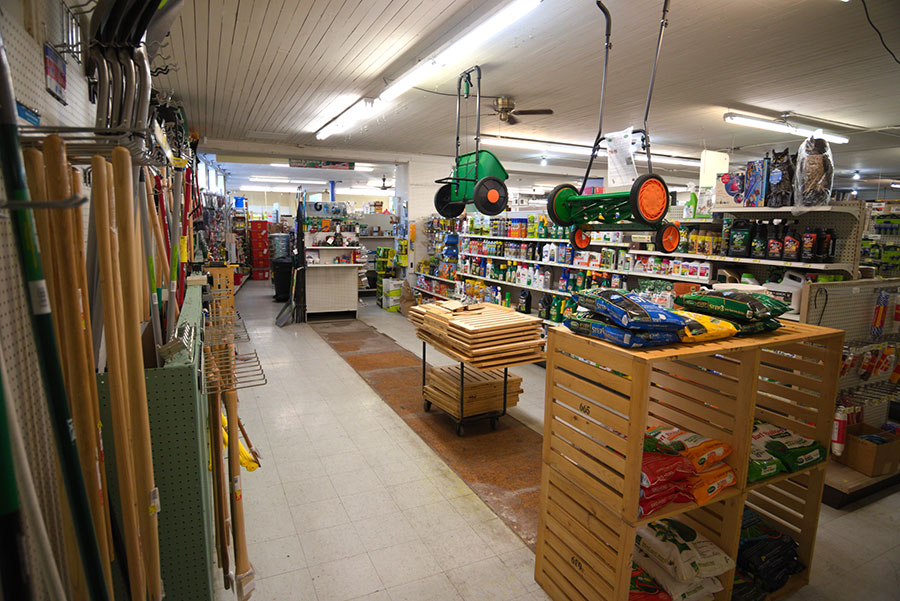 The 5,000-square-foot sales floor is still in the middle of a remodel.»

Their first day as the new owners was August 3, 2020. In addition to Arlene, who takes care of back-office functions for both stores, Heston’s brother Jeff also works at Miller’s. The family members had to figure out how to get a closed, tired store up and running again in the middle of a pandemic. Heston embraced the challenge of bringing back the neighborhood convenience hardware store.

“When you’re looking at financials, you have to determine what you would change to make a difference,” he explains. “The inventory was there, although a little light. There was some dead inventory and the merchandising was bad. Those were simple fixes by adding more inventory and remerchandising the store.” 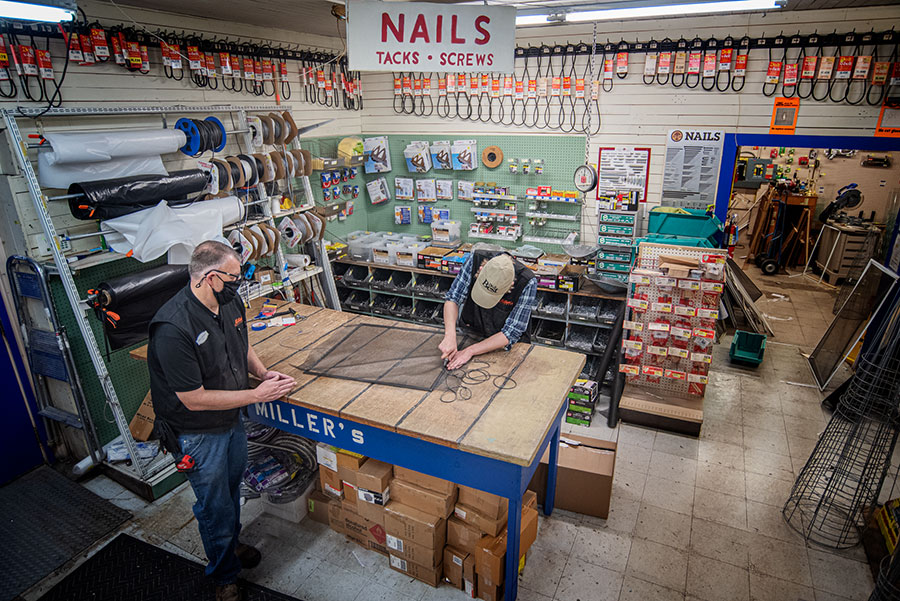 Miller’s does a big business in rescreening and glass cutting.»

Heston is very complimentary of the work done by his Do it Best territory manager, who has helped him rejuvenate the store. They participated in Do it Best’s Merchandising Essentials program, which helped them identify which categories were missing. Old fixtures were replaced and substantial upgrades have been made to the interior and the exterior with design help from Do it Best. The paint department is 90 percent done and they have started redoing the electrical department.

Things look a little different now but Heston says maintaining the customer-first attitude and the hometown feel of Miller’s is the top priority.

“When I reopened Miller’s, it was all about service. I decided I wanted to focus on giving the most personal service,” says Heston, who ended up rehiring only one person from the closed store. “That employee had tried to fix the service and is thrilled to see how it’s changing for the better. When a customer comes in, they are walked through the project. That helps folks feel comfortable and want to come back.”

Heston saw an opportunity to add a garden center, which the store had never had before. There used to be two entrances, so he closed one on the side that is exposed to the street, and next spring will open a 2,000-square-foot garden center surrounded by a wrought-iron fence. 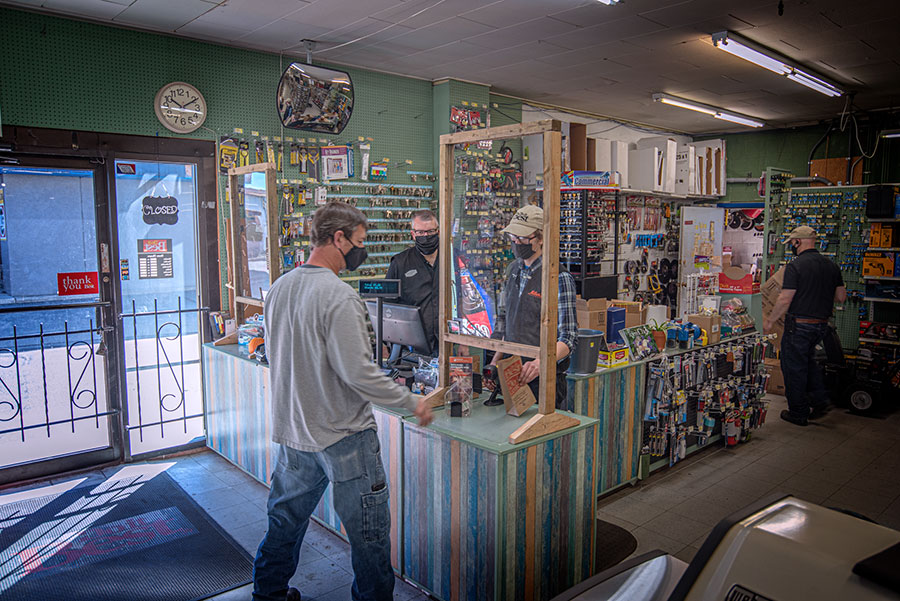 Reopening the store in middle of a pandemic meant the first step was to install a plexiglass shield for the checkout.»

Heston literally grew up in the hardware business, as both his grandfather and father had owned and operated Ace Hardware stores. His grandfather opened the first Ace store in Redding, Calif., in 1963, which was later sold in the mid-1980s. His dad bought another store north of there that was sold around 2000. His dad came back in 2009 and bought another store, from which he retired.

“I worked in my dad’s store growing up, then later spent two years working as a district manager for Do it Best Corp., before going back to my dad’s store,” Heston recalls. “Then the opportunity came up to work for Ace.”

There is another Ace store 1.25 miles away from Miller’s, which is the reason Heston went with Do it Best instead of Ace. “I didn’t want to infringe on their territory,” he explains. 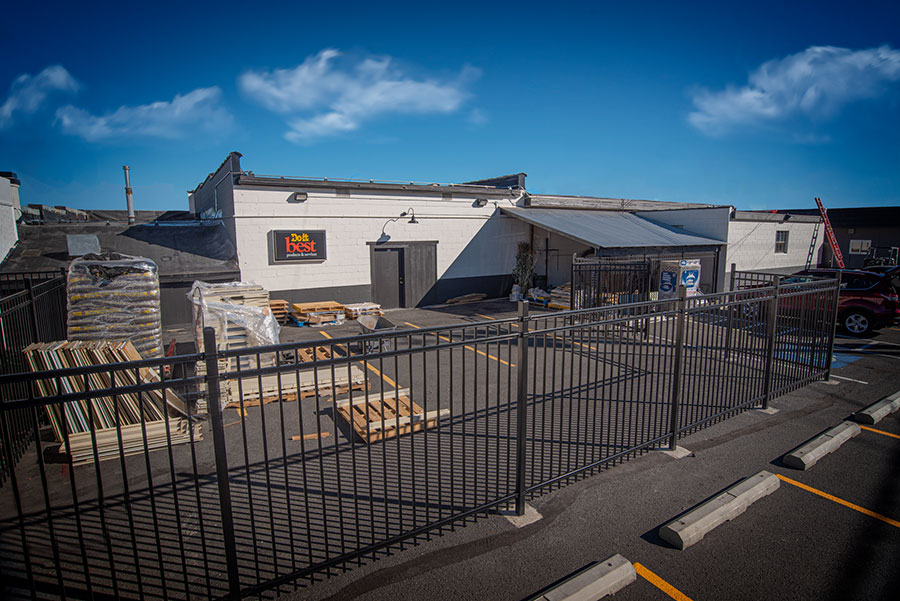 Space has been carved out to create a garden center for next spring.»

His two stores are located four miles apart. “South Hill has three hardware stores and two are mine,” Heston notes.

His years of experience helped prepare him for the challenge of reopening Miller’s in the middle of a pandemic. “The first thing was to install sneeze guards, then we brought in an end cap with masks, gloves and cleaners. All employees wear masks. Customers are glad to see we’ve reopened and that we’re looking out for their safety,” he says.

Beyond the physical location, Heston had a new logo designed and plans to ramp up Miller’s social media presence and more heavily promote the Do it Best Rewards program once the remodel of the 5,000-square-foot sales floor is completed next spring. 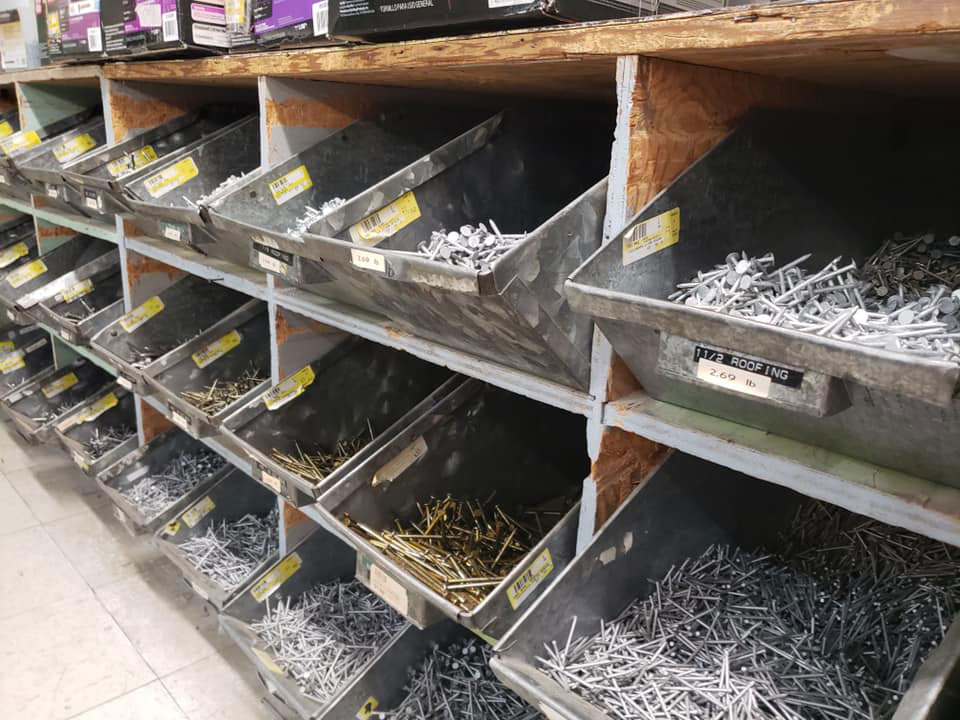 Nails are still sold in bulk at Miller’s.»

“We’re using the Do it Best program to create a website for the store and doing more B2B like I’m doing with the Ace store. We’ll be adding power equipment next,” he says.

Paint sales have been strong, followed next by plumbing. Miller’s Hardware does a big business in rescreening and glass cutting. That follows the blueprint of growing the business through service.

For now, Heston is spending 90 percent of his time at Miller’s, becoming acquainted with customers and ensuring his six employees execute his vision of service. Even though they are still in the middle of a remodel, business is up 35-40 percent, which reassures Heston that he hasn’t lost his touch.