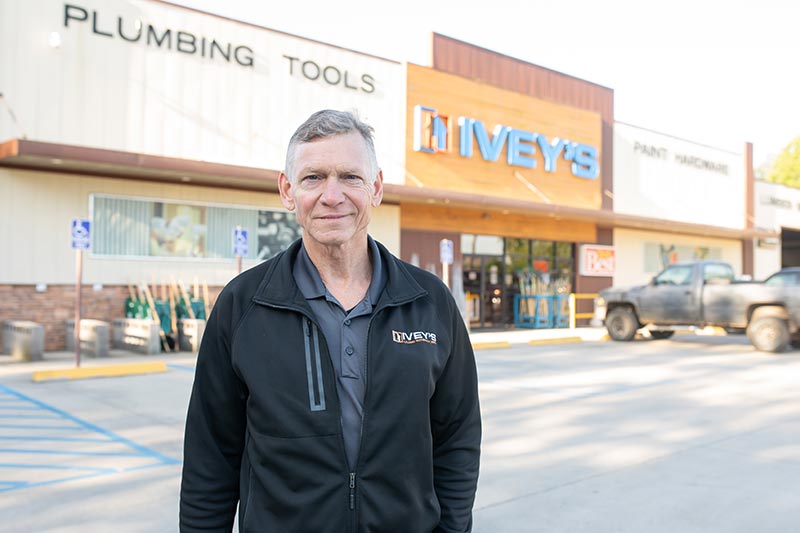 Mitch Johnson, president of two Ivey’s Building Materials locations in Louisiana, has been improving and growing the family business for half a century.

Mitch Johnson entered the home improvement industry at age 14 by way of his high school sweetheart.

Mack and Roy Ivey co-founded Ivey Lumber Company, a small sawmill and lumberyard, in Logansport, La., in 1969. In the early 1970s, Mitch had begun dating his classmate Pam, Mack’s youngest daughter. She mentioned to Mitch that her dad was looking for part-time help stacking lumber.

“It was a good deal,” he says. “I could work at the store, make some money and spend more time with my girlfriend.” He worked for Mack through high school, learning a little bit of everything around the yard.

Although Mitch gave college a brief try, he really wanted to be back at the store. He ended up marrying Pam and has been helping the family business succeed since then. Today, Mitch serves as president of two Ivey’s Building Materials Center locations in northwest Louisiana. 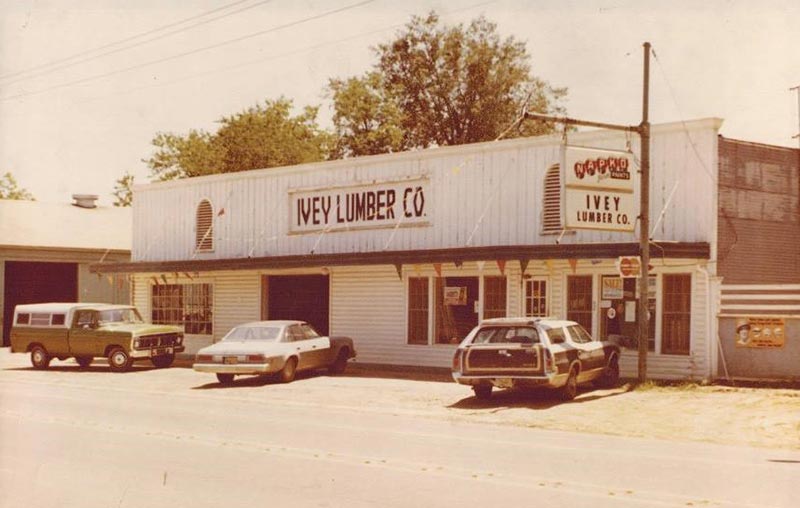 Ivey Lumber Company started out as a small, dusty lumberyard in 1969.

The original location was sold and a new ground-up location in Mansfield opened in the early 1980s. Despite facing a deep recession, the business continued to grow until Mack Ivey was diagnosed with cancer in 1988 and passed away shortly after.

Mitch credits his father-in-law for being a great mentor and establishing a culture that continues today. Mack’s business philosophy was based on honesty, creating relationships, going the extra mile and doing it all in a relaxing, sometimes humorous manner. “My father-in-law was a good problem solver and he taught me to treat people with fairness,” he says.

In 1991, Mitch bought out Roy Ivey and kicked off a new generation of ownership. With Pam involved on the accounting side, Mitch worked hard to keep the company moving forward for many years until their sons Josh and Jordan were old enough to join them. Josh continues to expand his involvement by serving as general manager of both locations, while Jordan is now a customer who operates his own construction company.

Mitch remembers the big boxes changing the competitive landscape significantly. “Back then, we just tried to focus on what you could do locally to build sales and grow,” he says. “You can outperform the big boxes by building relationships with your customers every single day.”

In the 1990s, Ivey’s got involved in outside sales to gain more pro business. That led to them serving contractors outside Mansfield.

“A big part of our business is shipping residential lumber packs to the Shreveport area where builders are most active,” Mitch explains.

In 2014, they opened their second store as a ground-up location in Houghton, La. 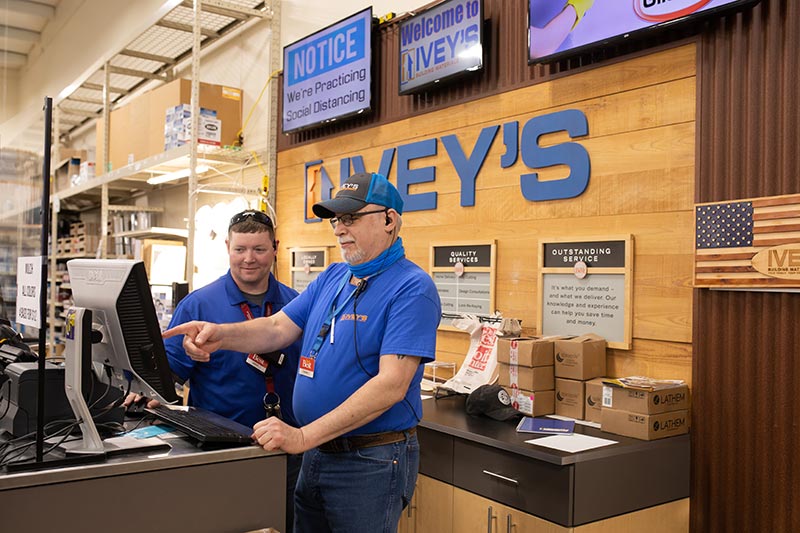 When they discovered the community of Haughton—10 miles outside Shreveport—had no hardware store, they began building a ground-up location that opened in 2014 to serve that more affluent demographic.

Mitch’s initial industry experience came working with a smaller wholesaler, and he’s very satisfied now as a longtime member of Do it Best. “They’ve got a great corporate structure that’s based on integrity. They have larger combinations of hardware and commodities and that helps us grow,” he says.

They are learning every day how to use their Epicor point-of-sale system on a deeper level. “It’s a great tool for purchasing and staying focused on the bottom line, as well as determining what’s performing and not performing,” Mitch says. 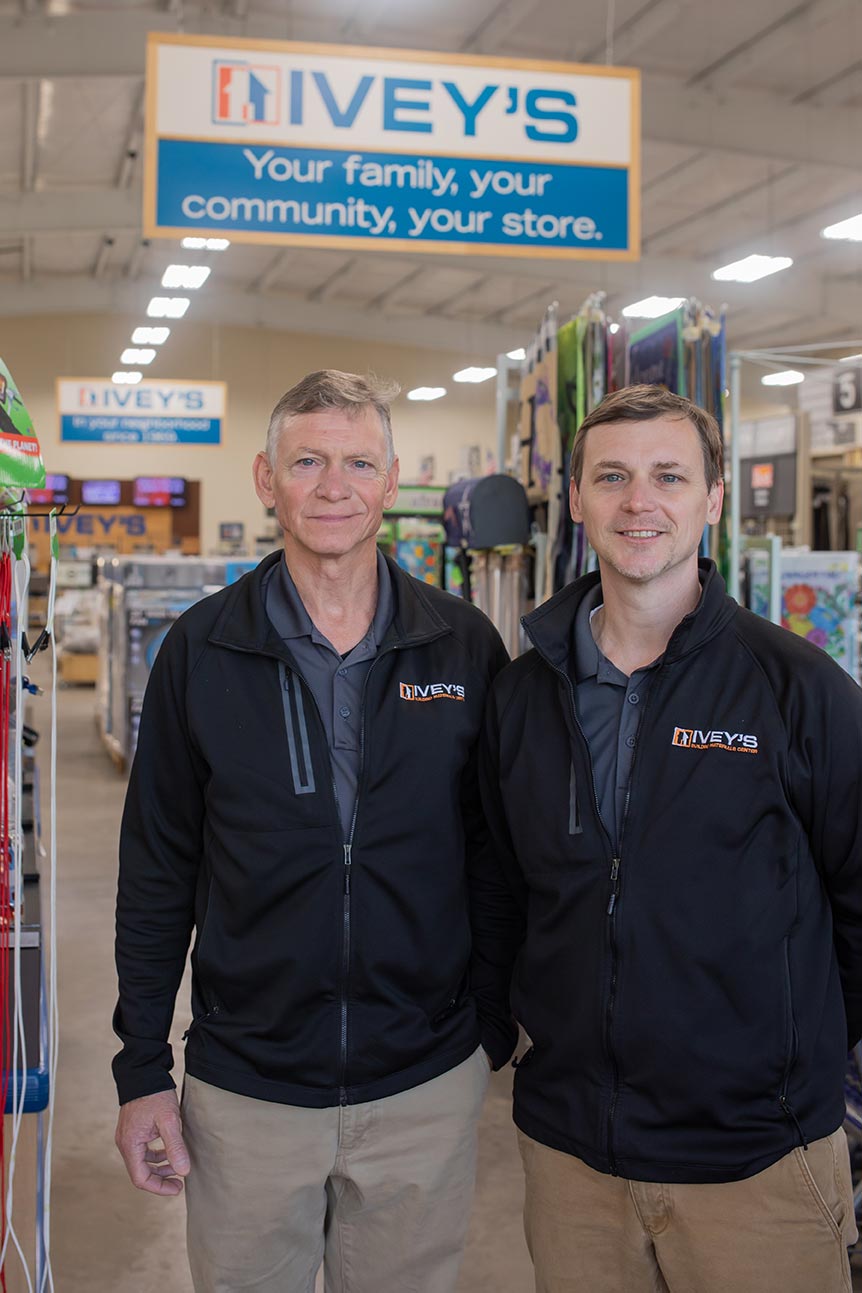 Mitch has been pleased to see son Josh take charge as general manager of both locations, using social media and technology to serve as sales tools.

HELPING OTHERS AND STAYING HUMBLE

The future looks bright for Ivey’s Building Materials, and that is a testament to the way Mitch has run his business, how he has treated people and how he has served his community. “Always do what’s right. That pays big dividends. But above all, we see how faithful God’s been to all of us,” he says.

Ivey’s has 60 employees who are all treated like they are part of the family. “We recognize birthdays and anniversaries and continually analyze wages so we stay competitive,” Mitch says. 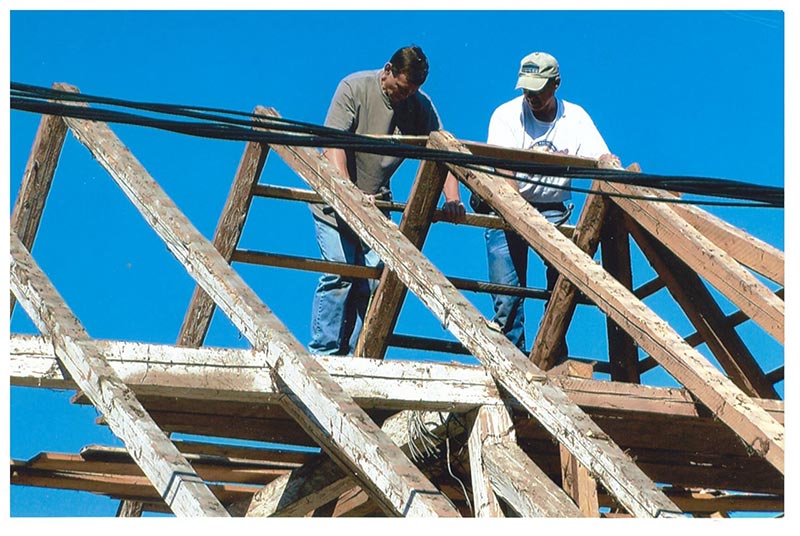 Mitch and Pam Johnson have been involved in mission trips around the world offering medical support, hunger relief and construction help.

The Johnsons have always had a strong connection to their church that filters through to their own community and ones around the world. Mitch served as president of a boy’s home in Brazil for about 10 years. He and Pam have traveled to remote locations all over the world on mission trips with various organizations offering medical support and hunger relief. “We’ve been able to see the world through the eyes of God and see how blessed we are in this country,” he explains.

Understandably, their experience and knowledge have allowed them to assist with construction projects in several countries across multiple continents. While their support overseas is primarily monetary, the Johnsons (and Ivey’s) are able to supply larger amounts of building materials for projects in the U.S.

“We’ve seen some truly unbelievable places, and we also stay connected with the people we meet. That’s just who we are. And our customers’ support of our business has allowed us to follow this passion and be a part of other people’s lives in different parts of the world. It’s truly a blessing,” Mitch says. 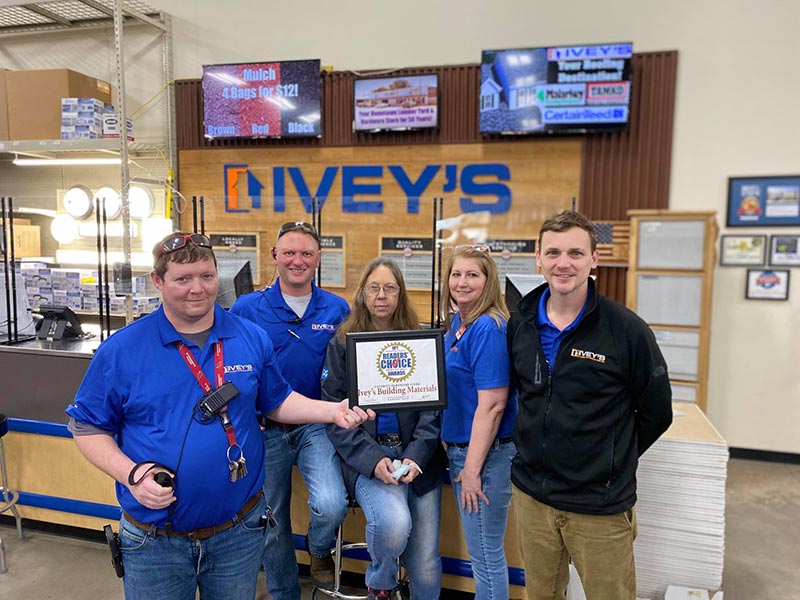 The Johnson family has worked hard to form deep connections in the communities they serve.

ENCOURAGING THE NEXT GENERATION

The Mansfield location is 60 percent contractor, while the Houghton location is 75 percent pro and 25 percent retail. Ivey’s has completed the transition from its early days as a retail hardware store with a lumber emphasis to more of a pro-oriented lumber center. 2021 was a strong year helped by the inflated price of lumber.

The business is also evolving its management and leadership as the next generation makes it mark. Josh was instrumental in launching Bid Desk, an online portal where contractors can bid on materials or projects and submit for an estimate. “It’s like a third arm of a salesperson,” Mitch says. “We’re even getting hits out of state, so it’s been a whole new avenue for growing sales.”

He credits ongoing learning as the best way to stay on top of the ever-changing landscape. Joining the Construction Suppliers Association put them in contact with other yards to compare notes, and Josh has become active in that group. “It was a real game-changer for our business,” Mitch says, “because it helped us reshape our vision and focus on improving things we weren’t strong in.”

EXPANSION ON THE HORIZON

With two successful locations embraced by customers, the Johnson family is working to open a third store soon in Blanchard, La. “That’s definitely our goal. We’ve got the land but we want to wait a little for the economy to settle before we go full bore,” Mitch says.

Winning the Beacon Award is a great privilege, according to Mitch. “God has given me the strength and energy to work all these years. When I think of the many people and family members I’ve had the opportunity to work with, if I can accept on their behalf then all the hard work will have been worth it,” he says.