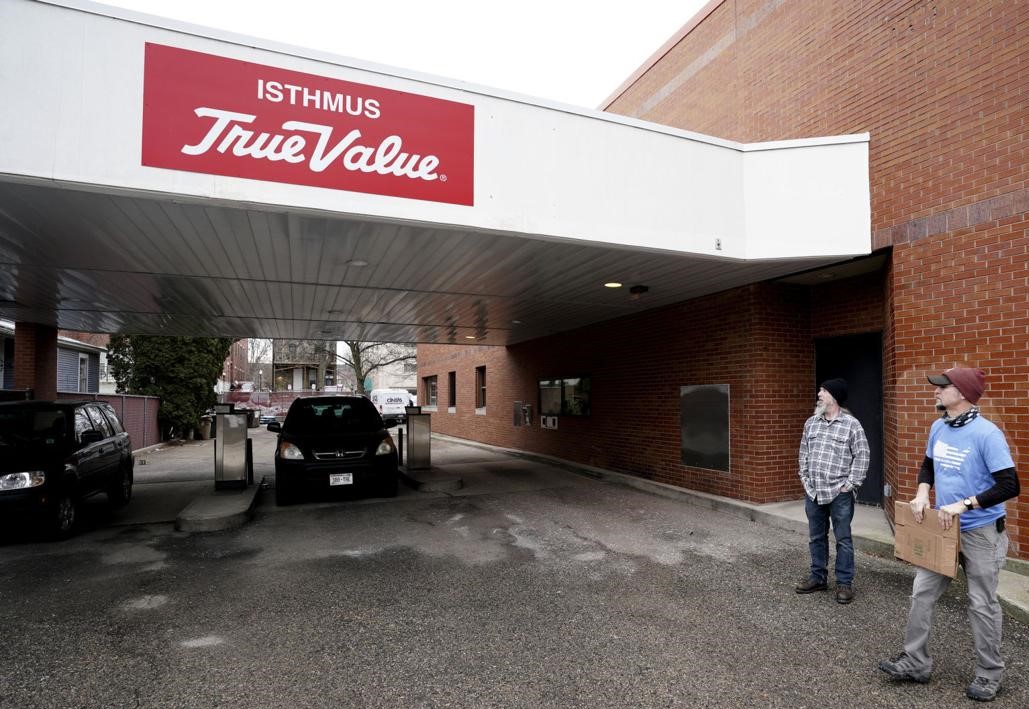 Their band hasn’t played a gig since March, but Jason Shaw and Greg Norman are back together. Only they’re strutting their stuff among the freshly stocked aisles of fuses, spools of rope, packages of batteries and tubes of calk instead of a stage at the Crystal Corner Bar or High Noon Saloon, writes Barry Adams in the Wisconsin State Journal.

Nearly three years after the closure of the downtown Madison’s only hardware store, where Norman and Shaw worked for over two decades, the longtime friends and members of the groove rock group Full Vinyl Treatment were getting ready to open Isthmus True Value Hardware.

And because the store is located in a former bank building at the corner of West Washington Avenue and South Bedford Street, they plan to incorporate the drive-thru window into the business plan.

Just don’t expect a hammer or roll of duct tape to be pushed through the pneumatic tubes anytime soon. Norman is waiting for and expecting approval from the city for the drive-thru where, initially, the service drawer will be used for small packages but there are plans for a larger 18×18-inch opening for items as big as a bucket of paint, a toaster or power drill.

Customers will be able to order an item over the phone, pay for it electronically and pick it up without getting out of their vehicle but drive-up orders can also be made along with curbside pick-up.

If there’s another hardware store in the country with a drive-thru, Shaw and Norman, and their True Value representative, are unaware of it.

“It started out as a gimmick, but now (with COVID-19) it’s more than a gimmick,” said Norman. “I think having a drive-thru hardware is going to be very unique.”

The site for the 3,000-square-foot store was selected not because of the drive-thru but for the prime location. The store, across the street from the CVS pharmacy and in the same block as the Echo Tap & Grill, is surrounded by student housing, upscale apartments and single-family homes. More apartments are being built within eyeshot and Norman and Shaw are hoping to rekindle the relationships they had with property management companies and other businesses when they worked at the Dorn Hardware store adjacent to Capitol Centre Market.

The hardware store, a staple in the neighborhood since the early 1980s, was forced to close in early 2018 to make way for a $2 million expansion at the grocery store. Tom Dorn, president of the hardware company, said at the time that he tried to find another space downtown to relocate the hardware store but he couldn’t find the right property to buy that would be profitable and fit his business model that needs a store to be at least 15,000 square feet and company-owned.