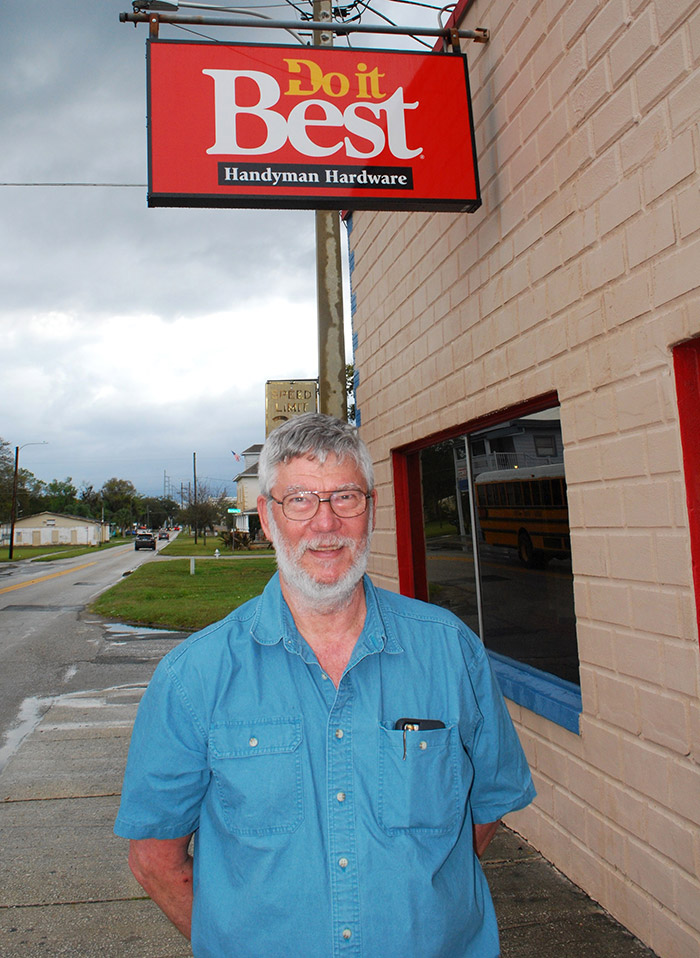 Rick Heuser, owner of Handyman Hardware in St. Cloud, Fla., is an active supporter of the downtown business district.»

In his spare time, Rick Heuser likes to turn bowls and rings on his lathe or make hand-turned pens to give to friends. It is intricate, detailed work that is a relaxing way to unwind from his stressful day job. Heuser operates Handyman Hardware, a Do it Best member in St. Cloud, Fla.

Every day is stressful when you are a hardware retailer operating during a pandemic, so he could use all the relaxation he can get. “Our business went way up. We’re still up 25 percent,” Heuser says. “The pandemic helped people find us.”

Handyman Hardware has developed a big niche in Trailmate tricycles, which are very popular with older residents. “For some customers the trike is their only means of transportation. They buy lots of accessories, lights, horns, and even electric motors,” says Heuser, who sold over 400 trikes through the years. 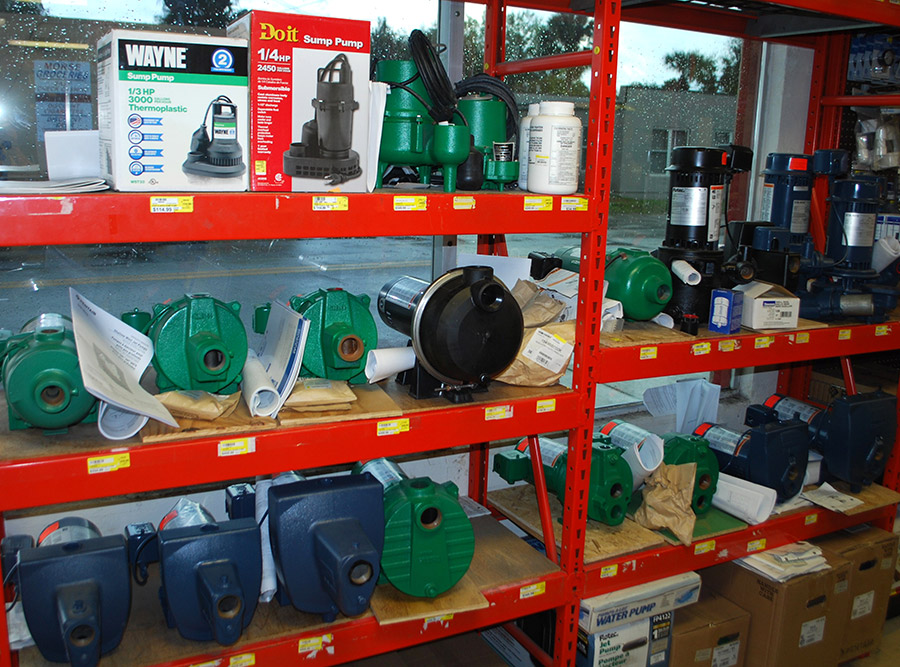 Handyman Hardware does a big business in pumps.»

Trike sales exploded during the pandemic. “We couldn’t put adult trikes together fast enough this past year. We sold 18 trikes to one development in six weeks,” he says. “Our trike supplier used to call and give us 10 color choices; now I’m told we can get black or blue or else there’s a three- to four-month wait. We’re still looking for tires and other parts.”

Hobby and craft paint, canning and gardening are other categories that have been selling like crazy, according to Heuser, who traditionally has strong sales in pumps and plumbing and is a certified drop-off and shipping station for UPS. 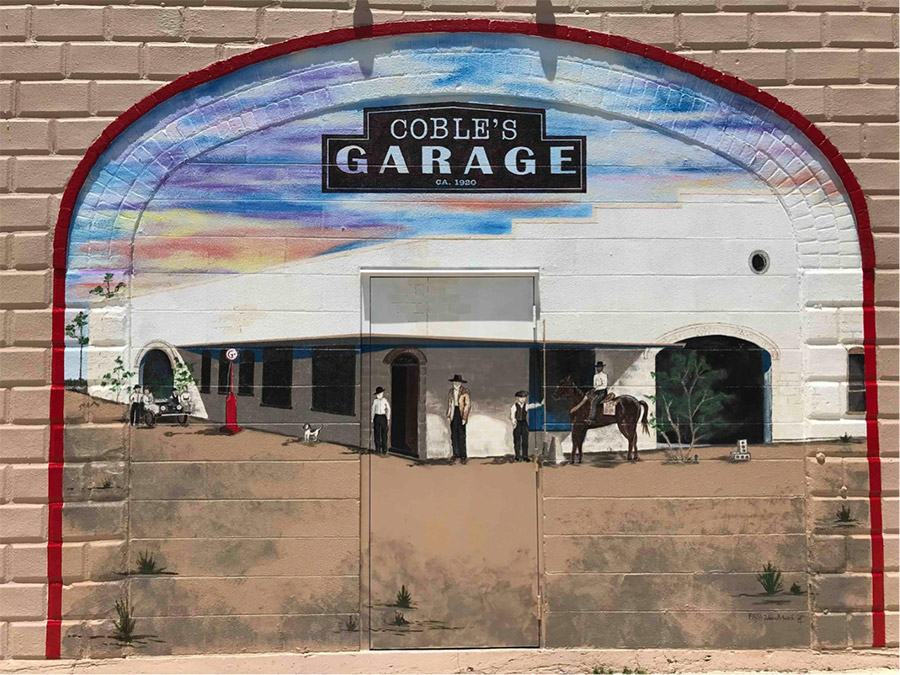 A mural was recently painted on the store’s front side that depicts Coble’s Garage, a Model T dealership that was housed in the 1914 building.»

From Halfway House to Hardware

Prior to getting into hardware, Heuser ran a halfway house for juveniles in Orlando, which gave him a unique perspective.

After college, he had two job opportunities: one was a photographer for a local newspaper for $6,500 and the other was a youth counselor for $8,500. Youth counselor won out, which led him down a career path that was both satisfying and challenging.

“I stayed there for 12 years, working my way up to superintendent and lived in the house for four years,” he points out. “I learned patience and that there’s good in everybody. Some kids didn’t have enough supervision at home. We got them jobs at McDonald’s or other places and they were very dependable. The kids that worked learned work ethics that they carried with them when they went home.” 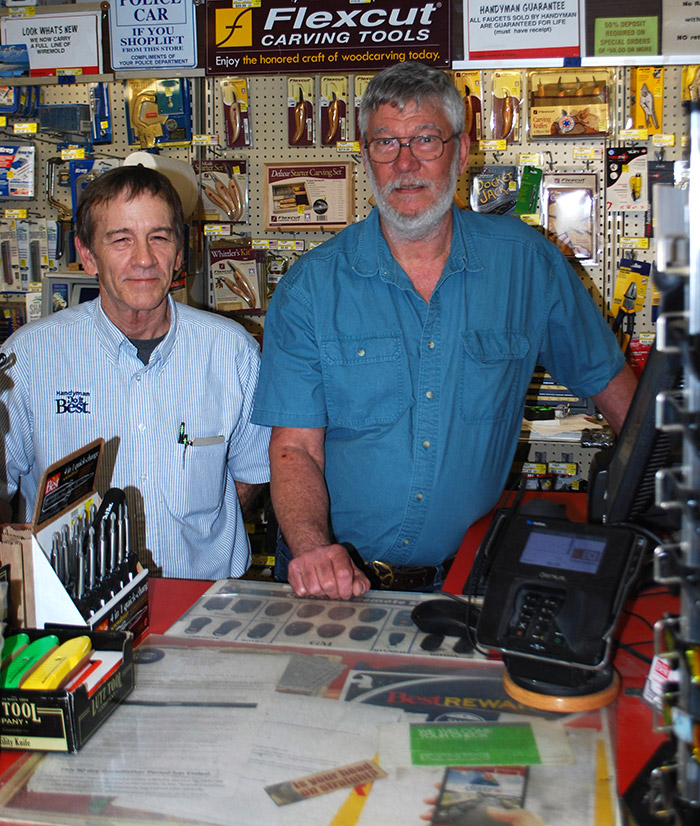 Mike Norton (left) has been a valued employee for more than 25 years, working alongside Owner Rick Heuser (right).»

Heuser adds, “A lot of it was accepting responsibility for their actions. If you act well, you get rewarded. If you act up, you lost privileges. It’s the same principle in business. I’ll have an employee come to me and whine about a co-worker and I’ll say the two of you need to work it out together, because you’re both adults.”

He was working for the halfway house while his father Bill was a mechanical engineer when their paths took them into the paint and hardware business in 1986. “Dad was going to make an offer on a store in Winter Garden, but HWI told us there was a better one in St. Cloud. We later bought the paint store up the street and moved our paint in with it,” Heuser recalls. 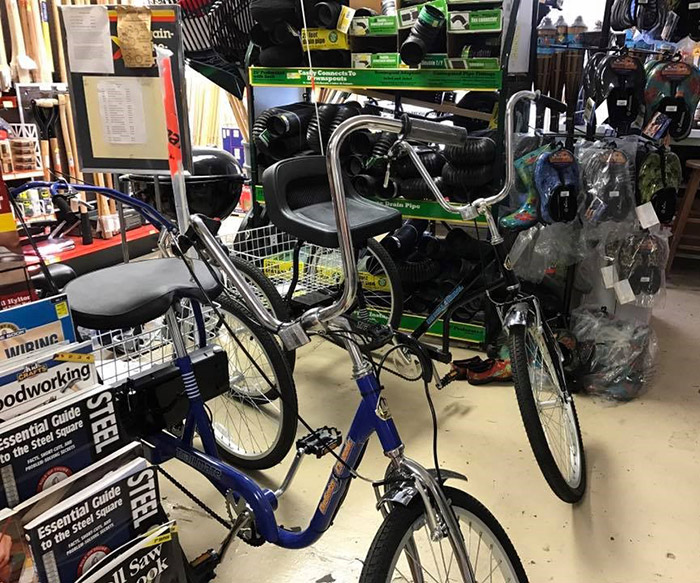 Adult tricycles has developed into a huge niche, with sales exploding during the pandemic.»

Then in the mid-90s another hardware store approached them and said they wanted to get out. They bought the building for $45,000 and the depleted inventory for $15,000 and moved the paint store there. “We eventually sold the paint store and used the money to buy and expand the original building. We had 6,000 square feet and a lot of warehouse. We added space for tool repair,” he notes.

Heuser worked through a succession plan with his parents over a 10-year period to buy out their stock and become sole owner a little over a decade ago. Although his father died five years ago, Heuser knows he would be proud to see the business has deep roots planted in the community. 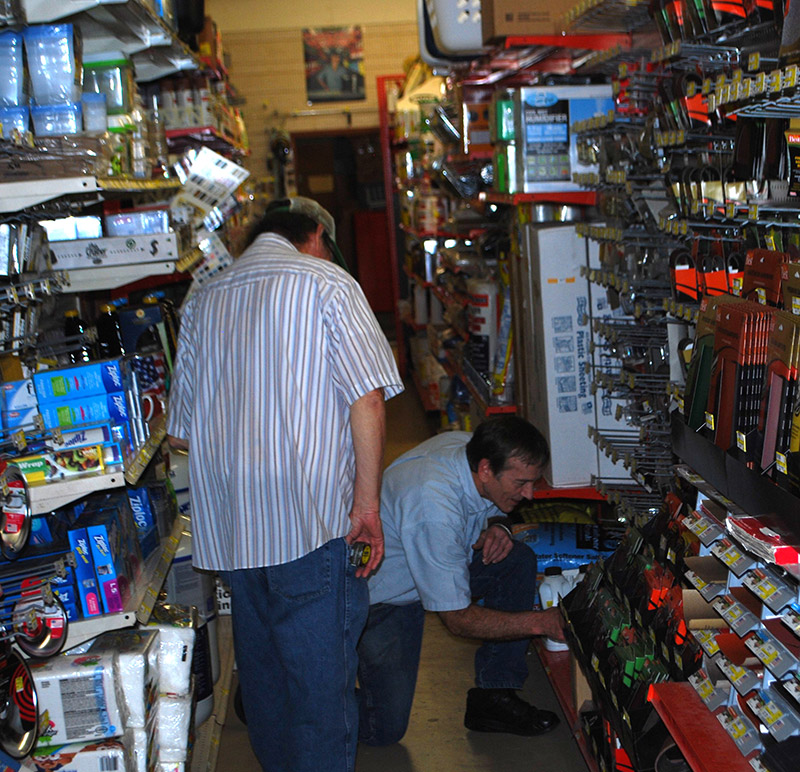 Handyman Hardware has relied on personalized service since Rick Heuser entered the business with his father in 1986. »

Revitalizing the downtown St. Cloud business climate has been a passion of Heuser for years—he serves as board president for St. Cloud Main Street. “St. Cloud was built as a retirement community for Union soldiers,” Heuser points out.

New stores and restaurants were opening and downtown merchants started having events the last Wednesday of every month. “The problem was getting all stores to stay open, but we were drawing more people downtown,” Heuser says.

When the pandemic kicked in last year, it hit local restaurants especially hard. Heuser gave the Main Street executive director $1,650 and told her to give $150 to each of the 11 restaurants in the area to help them get through this tough time. “We didn’t shut down here in Florida as long as they did in other states, but it’s still been difficult for some local businesses,” he says. 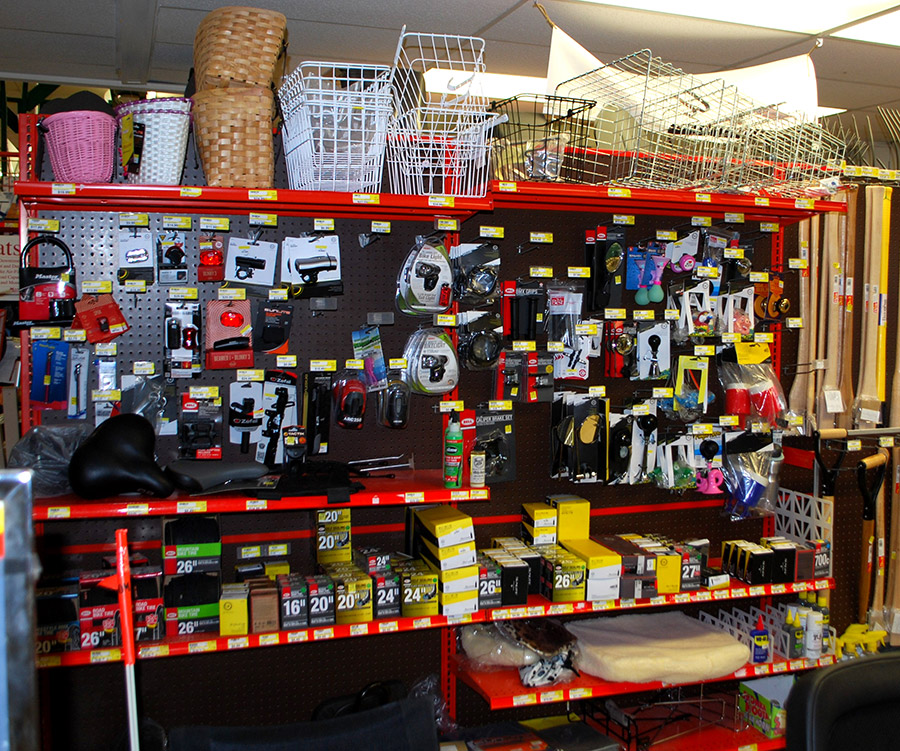 Selling a lot of adult tricycles means there is a strong market for tricycle parts and accessories.»

The Rotary Club contacted Heuser and said they wanted to paint a mural on the front side of the store’s building, which dates back to 1911. The recently completed mural was based on a picture of the building from 1920 when it was a Model T dealership named Coble’s Garage.

“It’s neat to have the mural there so it looks like a garage again. There still is a two-bedroom apartment in the back, because you lived where you worked,” he points out.

Other murals and historic markers are going in throughout the downtown area, and the whole project was made into a documentary that was co-sponsored by Handyman Hardware. The community is invited to an upcoming dinner and screening of the film in a local theater.

“Community involvement has always been important to us,” Heuser says. “I’ll support high school baseball teams, Girl Scout cookies, Eagle projects. If they need $100 of fittings or paint, we’ll set them up.”

Heuser has several employees who have been with him for decades, but finding and keeping good help remains an ongoing challenge. “I operate under the philosophy that the customer is always right and not everyone has that mindset,” he says.

Although Amazon does hurt, Heuser has found success with Do it Best’s ship-to-store program, even if it leads to the occasional odd sale. “We get people from Brevard County who order stuff. Had a lady order horse feed from us and one guy got 10 sheets of paneling. We’ll take what we can get,” he says. 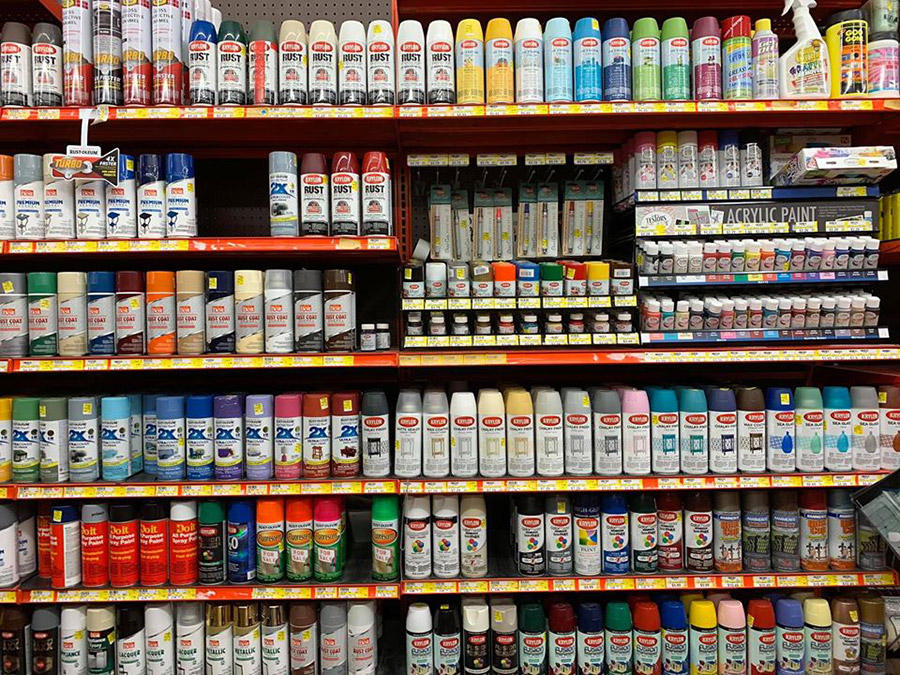 Paint sales have taken off during the pandemic, especially hobby and craft paint.»