Ambridge Do it Best Home Center

Growing up in western Pennsylvania, Frank Strano knew he didn’t want to follow his father into the steel mills. Frank’s brief time after college in an office job at a steel mill convinced him to do something else.

“What I saw in the steel mills was a complete lack of investment in equipment—everything dated back to the 1940s,” he explains. “I knew that was not what I wanted to do with the rest of my life.” 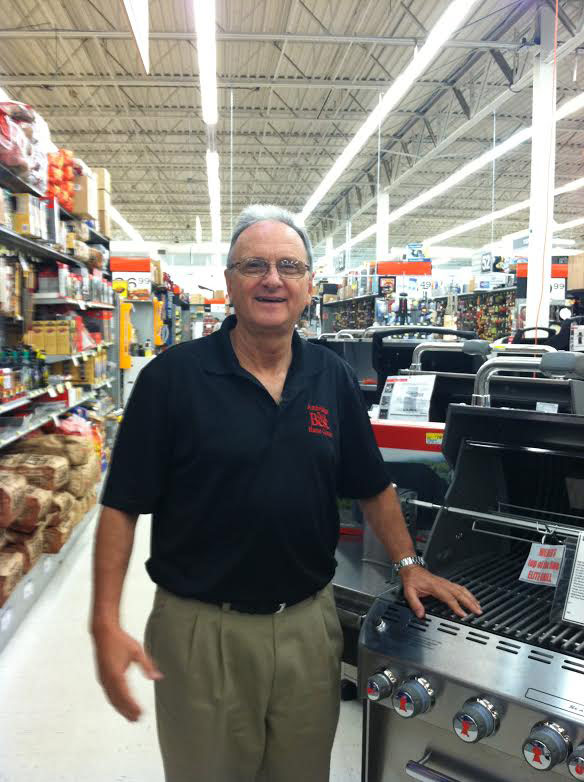 Frank Strano has worked hard to grow and improve Ambridge Do it Best Home Center since starting back in 1980.»

So, Frank joined his brothers in a successful home remodeling business: F.D. Strano Sales. Later, they even convinced their dad to leave his steel mill job and join them in the business.

The family’s home remodeling business was growing throughout the 1970s and the Stranos needed a large warehouse to store materials, which they had been buying by the truckload. They began selling roofing, siding and gutters to other contractors out the back, which is how Ambridge Building Center got its start in 1980.

Investing in the Epicor point-of-sale system back in 1988 turned out to be one of the best decisions Frank ever made. “I had decided to go with another system, but the Epicor sales guy convinced me it would pay for itself in nine months,” Frank recalls. “He was right—it did pay for itself, and it was a major turning point in how we grew the business. We started collecting data and knew what to buy.” 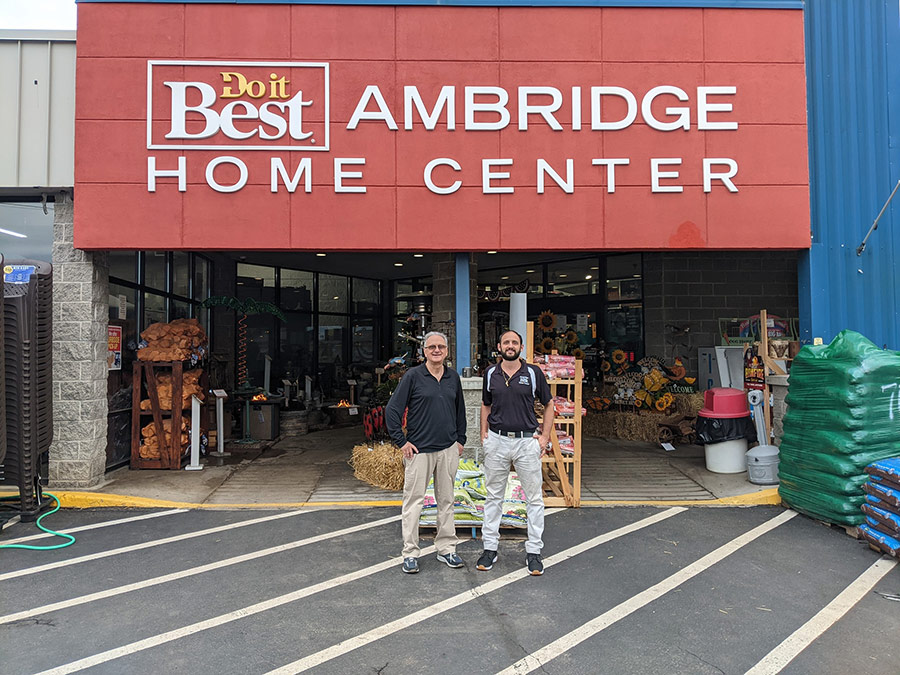 Frank Strano is proud of the contributions his son David has made to improve the business with particular emphasis on social media.»

The business thrived throughout the 1980s, but Frank knew the big boxes would arrive soon, so he made the proactive move to construct a 40,000-square-foot building featuring 25,000 square feet of retail space, moving to the new location in 1995.

Then came an unexpected development. In 1996, Sears opened three hardware stores in a small but more affluent town just two miles away on the same highway. 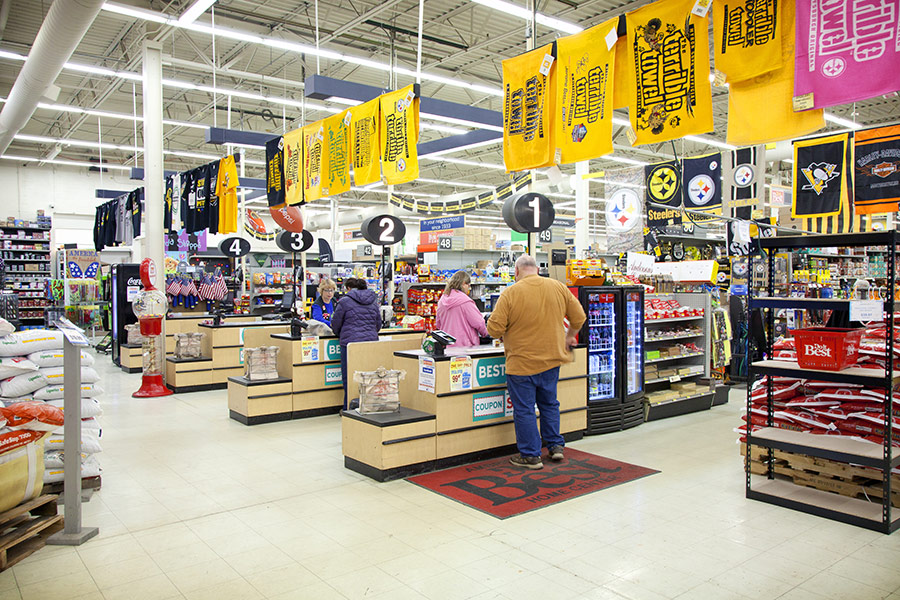 With 35,000 square feet of selling space, Ambridge Do it Best Home Center can meet the needs of its diverse customer base.»

As Frank recalls, “We did bang-up sales the first year, then sales dropped 5 percent the second year after Sears opened. If that’s all they took from us, then I knew they weren’t doing well.”

People were driving past all three Sears stores to come to Ambridge Home Center, because Frank had developed a more customer-friendly store. Two years later, Sears closed all three stores.

“We didn’t like that they were there, but our goal was never to put them out of business,” Frank explains. “We just worked hard to keep up, and they eventually realized it wasn’t worth it to stay open to gain only 5 percent with the same square footage.” 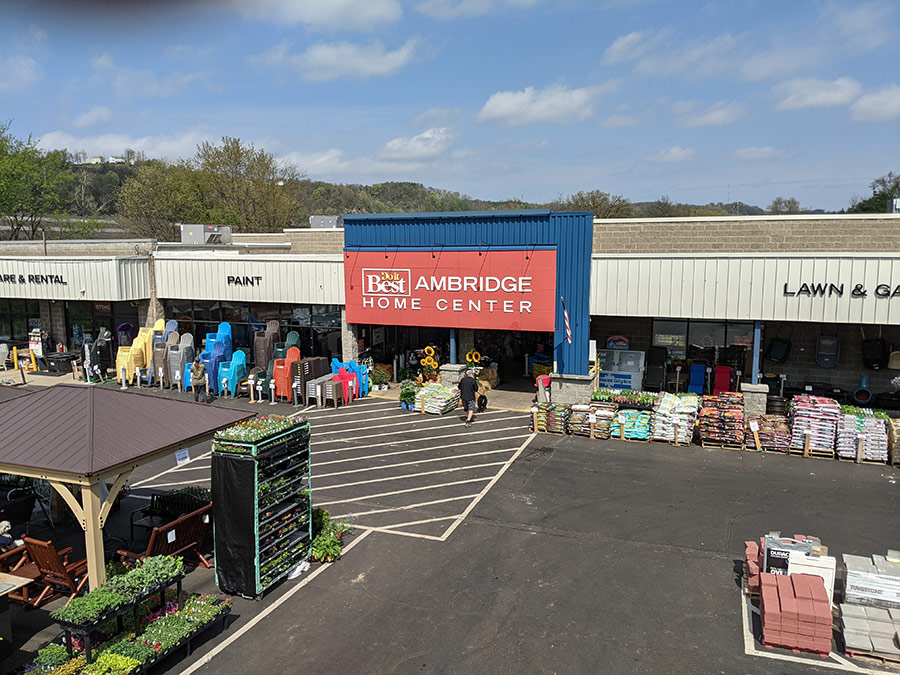 Partnering With Do it Best

After being with True Value for two decades, Frank joined Ace in 2001. He switched once more to Do it Best in 2007 and jokes, “I’m on my third marriage now with Do it Best and I’m very happy.”

Do it Best helped Frank expand the retail space in 2009 to 35,000 square feet so he could display more merchandise. He used the added space to bring out the back stock and spread it out a little more, which created the perception the store was carrying lots of new products. 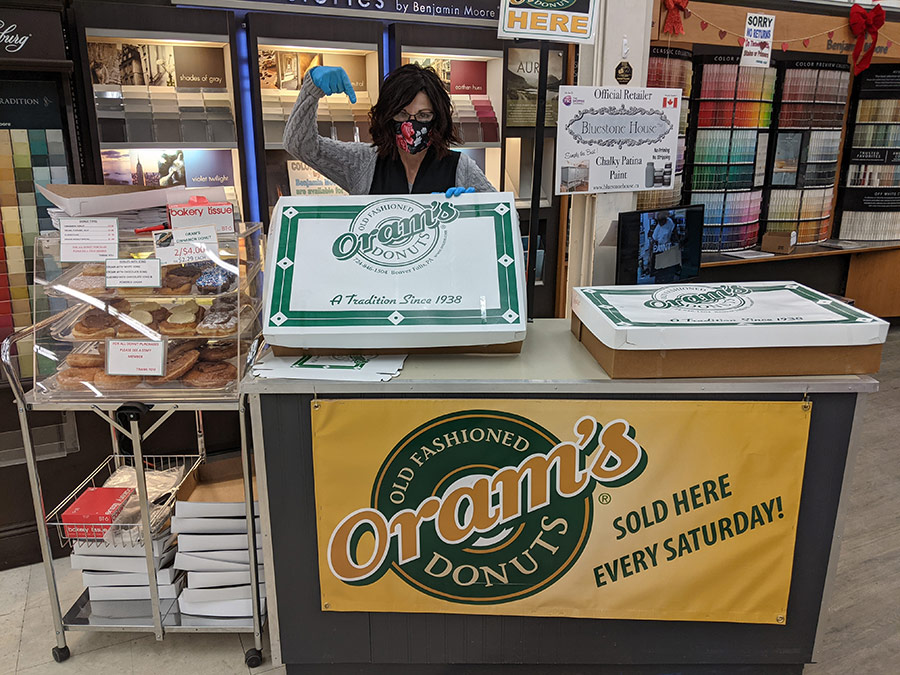 Adding donuts from a local bakery has had a dramatic impact on early Saturday morning sales.»

With Ambridge’s economy and population on the decline, the store’s sales became stagnant despite the expansion. In 2010, he developed an INCOM supply business that has found success selling to small industrial mills by undercutting the big boxes.

Frank says Do it Best has helped them the most by letting them have flexibility in their business. “What works in one community may not work in another, and Do it Best let us decide what products are needed and made them available to us,” Frank explains.

Frank is hands on with the business but hands off with their 75 associates. “My wants and needs are not the same as our associates, so I don’t try to mold them into my way of thinking. Everybody should be treated as an individual,” he says. 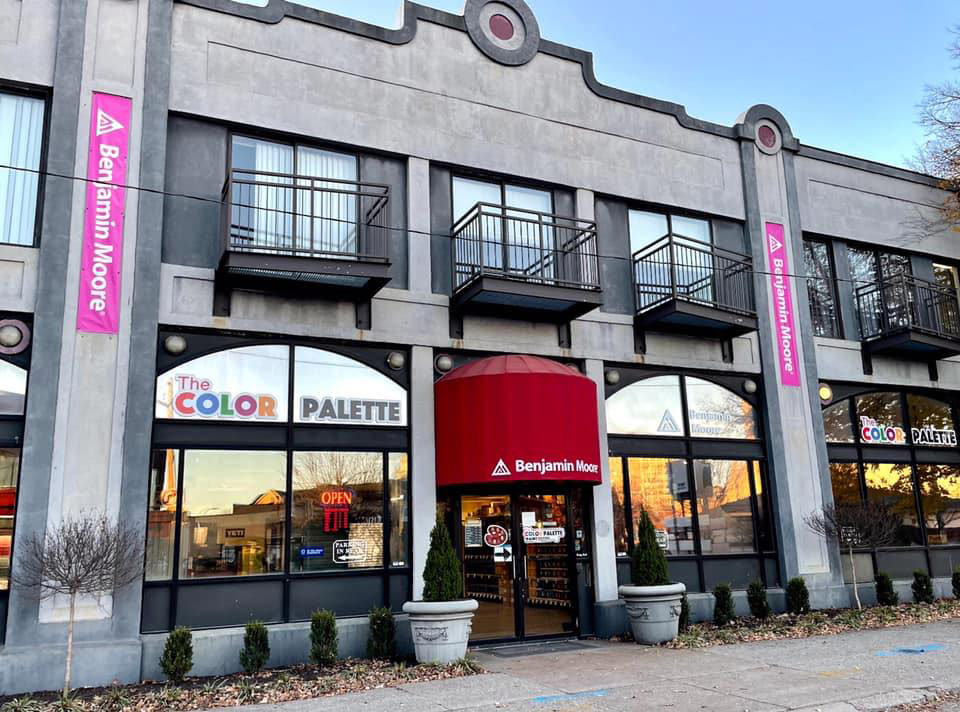 Frank adds, “The employees all understand that this is a relationship business where we listen to the customer, have the product knowledge and then satisfy their needs.”

Grooming the Next Generation

Frank is very proud that his son David has followed him into the business and is now seen as the face of the store. David has spearheaded a robust social media campaign that reaches customers 20 miles away. In 2016, the two partnered to open The Color Palette Paint Store in Pittsburgh, a pro-focused store selling Benjamin Moore paint.

Another expansion project did not pan out. In 2017, the Stranos opened Hampton Do it Best Home Center in a high-income area 35 miles away. “I should have done more homework before opening that store,” Frank admits. “It turned out that customers were buying low-margin items like grills in great numbers, but DIY stuff like hardware and paint wasn’t selling.” They closed that store in early 2021 and chalked it up to a learning experience. 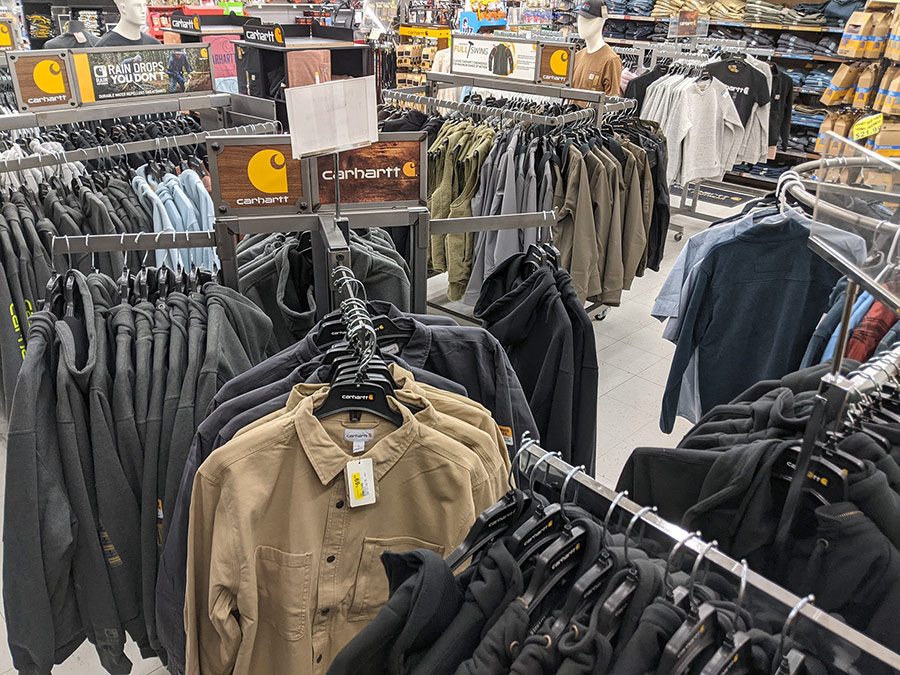 The store features lots of niche categories such as workwear and Pittsburgh sports team merchandise.»

Frank has always liked to experiment with different niche categories, and David is full of creative ideas to carry products not found at the big boxes. One example is pasta sauce from one of Pittsburgh’s top restaurants, while sports team merchandise for Pittsburgh’s three pro teams has become very popular in the store.

Frank credits David for the success of several food-related initiatives. They have picked up traffic and sales by hosting the Peach Truck and from regular visits from food trucks in the parking lot. David had the idea to bring in donuts from a nearby bakery and now the store gets busy at 7 a.m. on a Saturday instead of at 10 a.m. 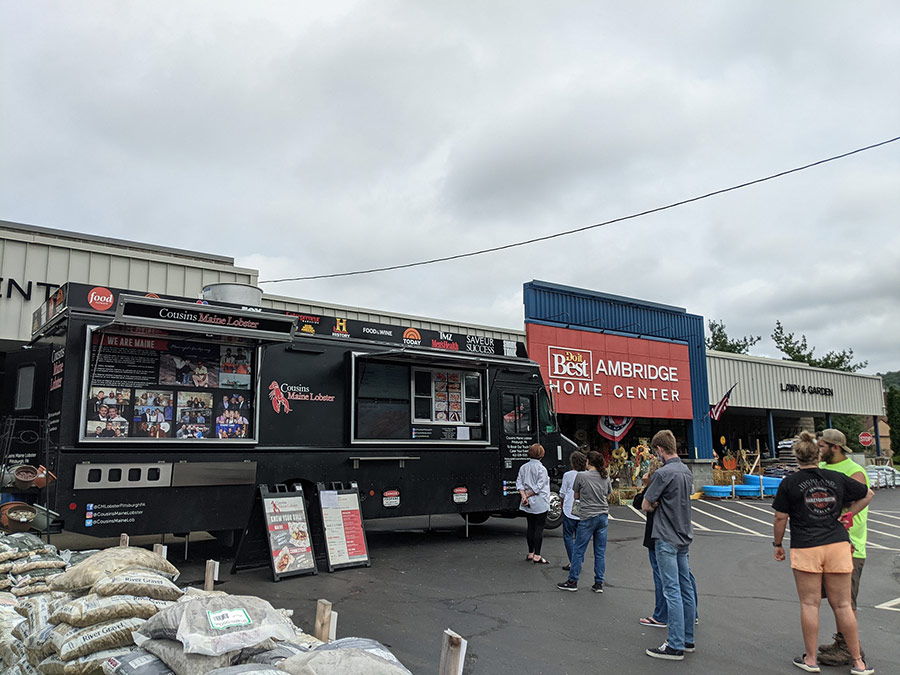 Ambridge Do it Best Home Center is known for helping the community with fundraisers and donations. Frank served as president of the local chamber of commerce, but says David is now the one making the connections with local groups. “You’ve got to get younger people involved to keep things going. Listen to them and let them run the show,” Frank says.

With David taking on more day-to-day responsibilities, Frank has started entertaining thoughts about retirement. “I’m trying to teach David about margins and the financials. He should have the vision of how to take Ambridge into the next 10 or 20 years,” he says.

Looking back on his 40-plus years of experience as a retailer, Frank says, “I feel I’m very lucky to receive a Beacon Award, because there are a lot of other retailers who are just as deserving. I represent all the other hard-working hardware retailers who love what they do.”