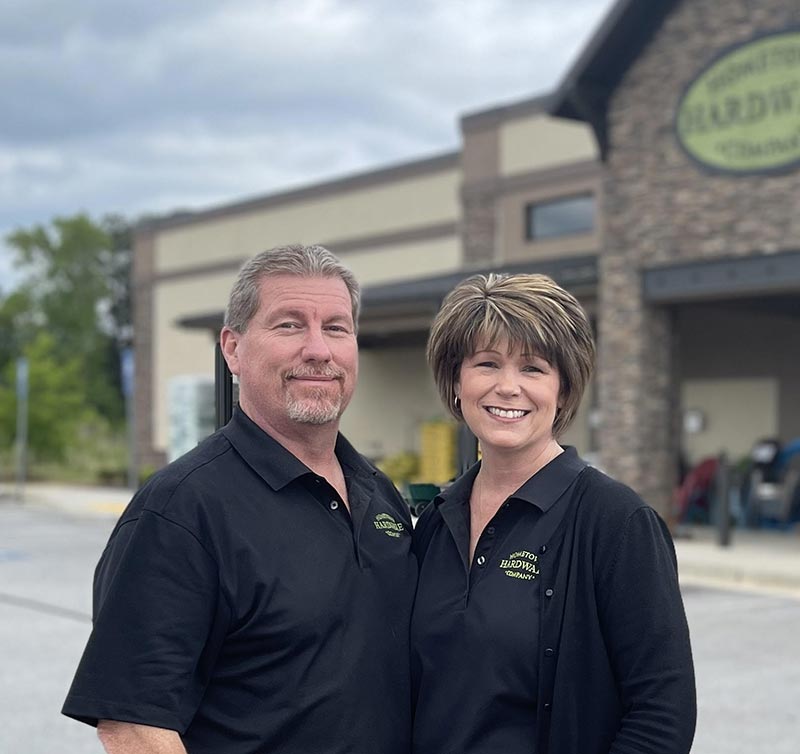 Six years ago, Phil and Deanna Cheeves discovered there was not a convenient place to buy a tarp in their small town of Senoia, Ga., 30 miles south of Atlanta. The local hardware store that had been there for 80 years closed in 2006.

That led them to spend a year visiting over 25 hardware stores in four states to get ideas on what to do—and not do—to build an old-fashioned hardware store in their town. The one stipulation: Deanna would be in charge of the interior design details, while Phil would rely on his product and project knowledge as a longtime supplier of building materials for homes in the area. Ground-up construction for the new store started in April 2018.

Phil was involved every day with the building’s design, construction and exterior presentation. He says, “We wanted to create something different and unique that would give people a nostalgic feeling. Concrete and steel give you a hollow feeling. Deanna added stone and color to the exterior, because if it doesn’t look pretty on the outside, she felt people wouldn’t want to shop here.” 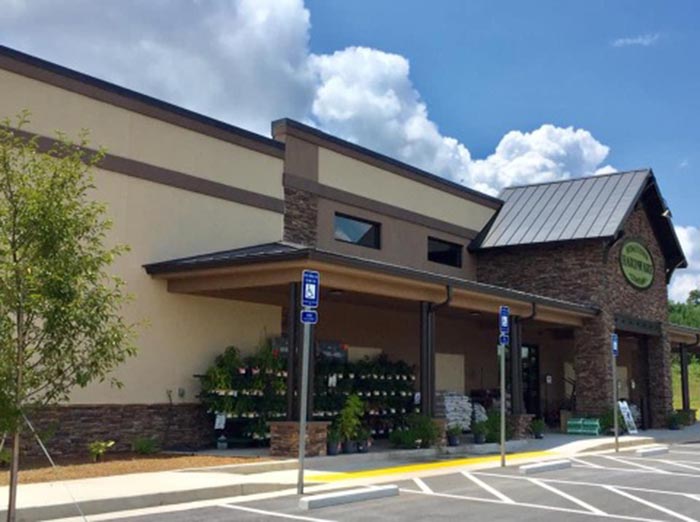 Deanna added stone and color to the exterior, because she wanted a look that was enticing to both men and women. 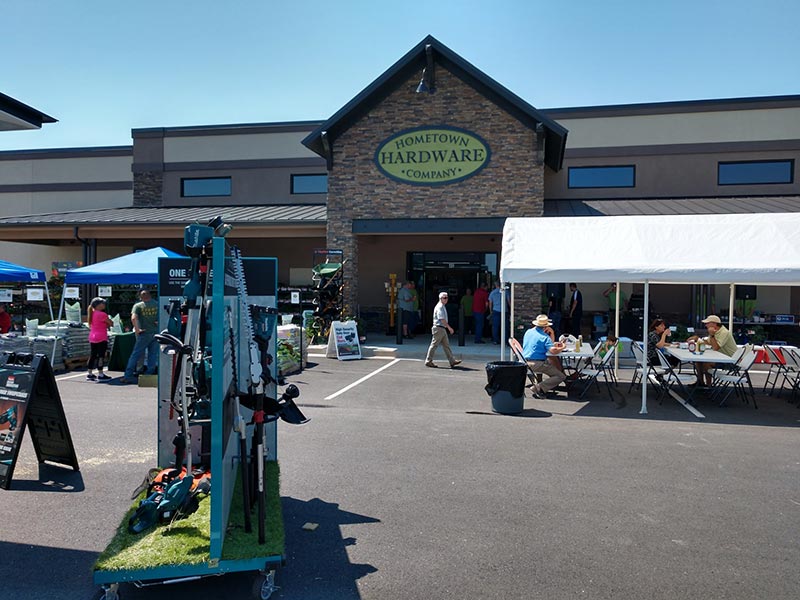 Since opening in October 2018, Hometown Hardware has been an immediate hit with the community.

Adds Deanna, “We wanted to construct a hardware store where both men and women felt comfortable and welcome and where families could enjoy their shopping experience.”

Since Phil and Deanna were new to retail, they relied on the expertise of Orgill in the beginning. “We wanted to be independent, and Orgill helped us understand how things work and they’ve allowed us to stay competitive with our pricing. They were heavily involved in where products were placed, especially from the female perspective,” Phil says.

Hometown Hardware opened in October 2018 with a grand opening held in May 2019. The store was an immediate hit with the community. As Phil points out, “Customers tell us they love how organized and clean the store is.” 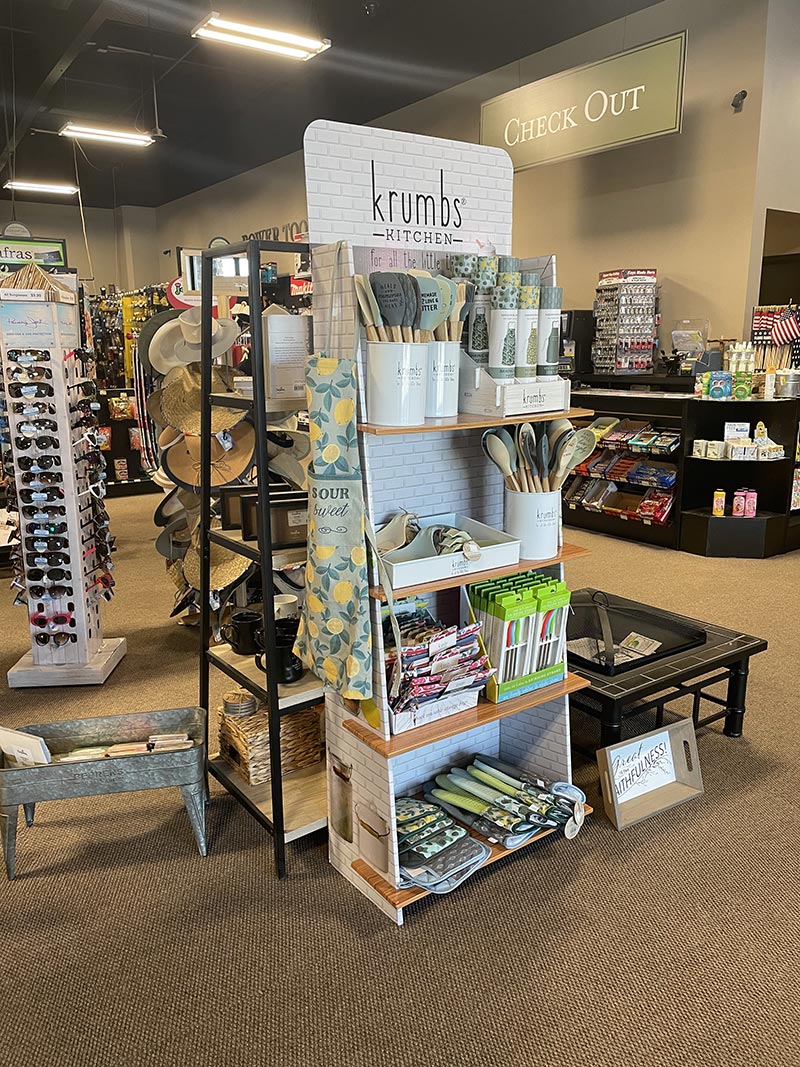 Deanna made sure the assortment gave female customers a reason to shop there.

One of the most important features of the store design is a carpeted area in the first 1,500 square feet of the store to create a welcoming place to shop. Phil and Deanna wanted a decompression zone that would deaden sound while encouraging people to stand and chat with their neighbors.

Phil says, “The store planners kept trying to fill up the decompression zone with gondolas, and we took them out later.” 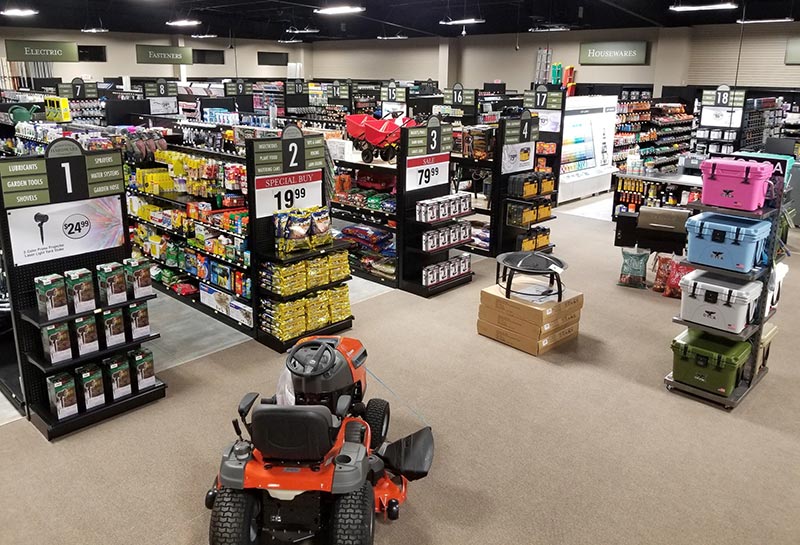 A carpeted area in the first 1,500 square feet creates a decompression zone that deadens sound while encouraging people to chat with neighbors. Black shelves were used to make products pop. 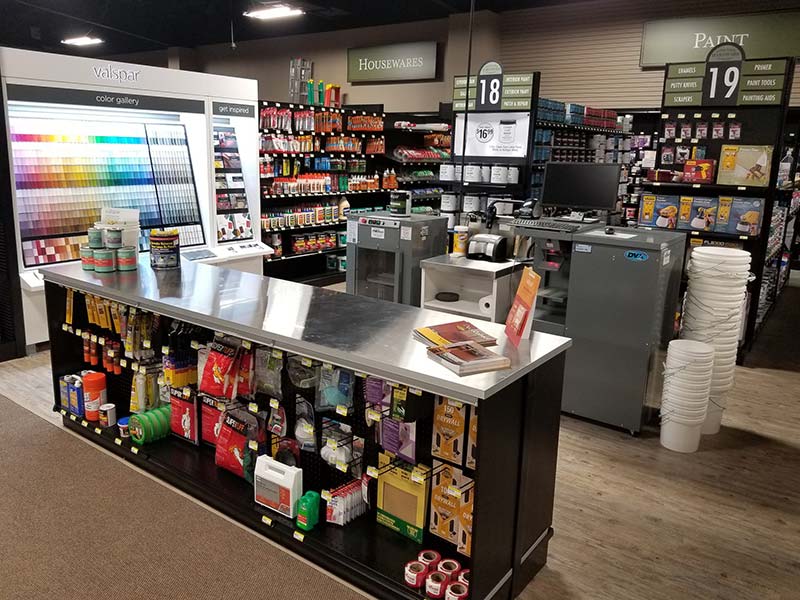 Deanna chose interior colors that were calm and peaceful and not too bright, while ensuring the store stays clean and organized.

“There’s a feeling of bringing the community together. We’ve had customers refer to our store as being like Cheers, where everyone knows your name,” says Deanna, who adds that they got the carpet idea from Office Max and Staples. “We even looked at non-hardware retailers like Walgreens, where we got the idea for having shorter shelves in the front.”

Black shelves were used to make product packaging pop and give the store a unique look. “We wanted colors that were calm and peaceful and not too bright,” Deanna explains.

She adds, “Hardware stores have always been a man zone. We visited stores where floors were not swept and there was no rhyme or reason to where products were located. We need cleanliness so it’s inviting to female customers. Our employees know to keep shelves dusted and the bathrooms are cleaned every day.”

The 8,300-square-foot sales floor was designed for shoppability. As Phil explains, “One product leads to another. We’re consumers too. If you’re thinking of a person’s time rather than an upsell, you’ll have a customer for life. We wanted to create a store where people like it and can’t figure out why.”

Phil and Deanna made sure there was enough spacing between gondolas so people in wheelchairs could have easy access. They also ensured the store has plenty of shopping carts and baskets, an essential ingredient to attract parents and families.

They rotate end caps by season and create end caps from scratch, such as a three-foot covered wagon end cap for Iowa Smokehouse jerky. They utilize baskets, bins, crates and galvanized buckets in merchandising displays and often use dried beans to prop up products in containers. 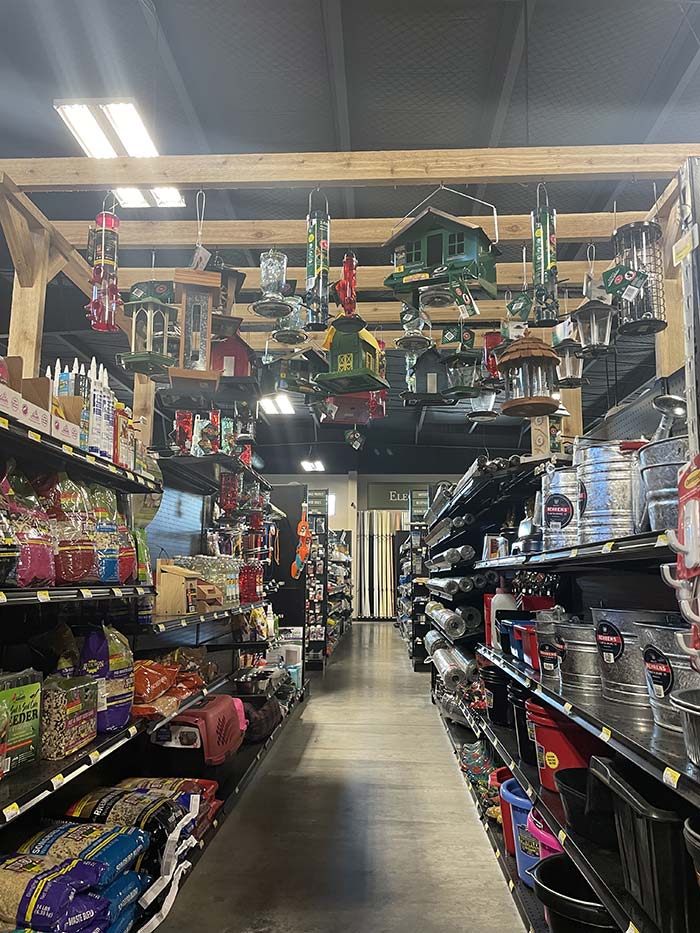 They installed a bird feeder display that spans the aisle, more than doubling feeder sales.

ON A GROWTH TRACK

Hometown Hardware received Orgill’s Summit Award for outstanding performance in 2019, 2020 and 2021. Customer transactions, average ticket size and margins all increased while the store had to tweak operations during the pandemic. Overall sales grew from $1.1 million in the period ending April 2020 to $1.6 million a year later as the community continued to embrace the store’s small-town welcoming atmosphere.

“We’re trying to keep the store fresh and new. We’ve been tweaking things after listening to our customers,” says Phil, who points out they haven’t experienced a typical year yet due to the pandemic and supply chain issues. “Our sales were up 30 percent last year despite lost sales due to lack of product.”

Hometown Hardware excels in the lawn and garden department, which saw sales increase 33 percent from April 2019 to April 2021. The store is also strong in fasteners and plumbing. 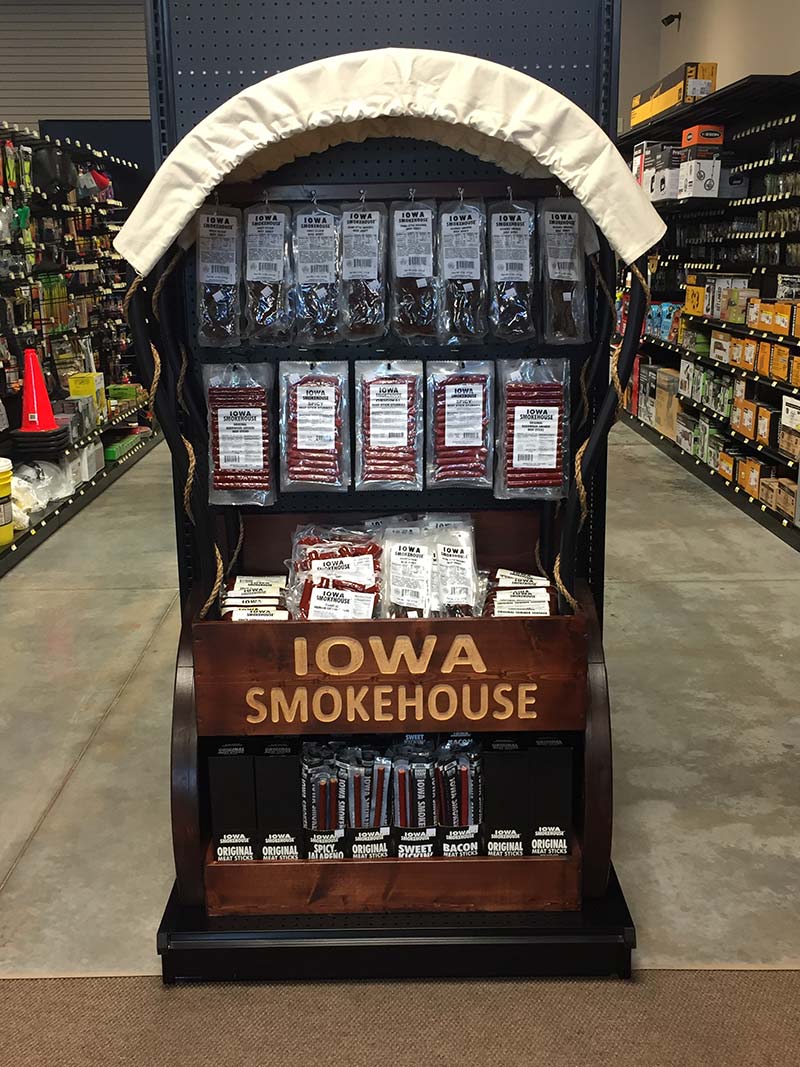 They create end caps from scratch, such as a three-foot covered wagon end cap for Iowa Smokehouse jerky.

Their strong growth is a sign that not every store needs to get bogged down in marketing strategy. “We don’t advertise, use social media or have e-commerce, because we wanted to create a business that reflected the traditional stores we grew up with,” Phil says. “Customers have found our old-school experience refreshing; our customer service, store design and operational efficiency encourage word-of-mouth advertising in the community and have brought us great success, allowing us to build personal relationships with customers.”

Another area where they differ from most retailers—they refuse to be open on Sundays. “We don’t believe in asking our employees to do something we are not willing to do, which is to work on Sunday,” Phil says. “That is a time for church and to be with family.”

Phil and Deanna say they are humbled to receive the Beacon Award for Best New Store. Says Phil: It’s a great honor just to be nominated by Orgill. We’ve been working with our heads down and didn’t strive for this.” Adds Deanna, “This is an award we share with our community, because their support has brought us great success.”