Bomgaars has transformed a shuttered chain store into a shining example of what their community needs, providing a one-stop shop for everything from hardware and tools to footwear and feed.

The Bomgaars store in Council Bluffs, Iowa, moved from a 33,500-square foot space into a former Kmart, bumping its square footage to 84,000 square feet and becoming a Bomgaars superstore. 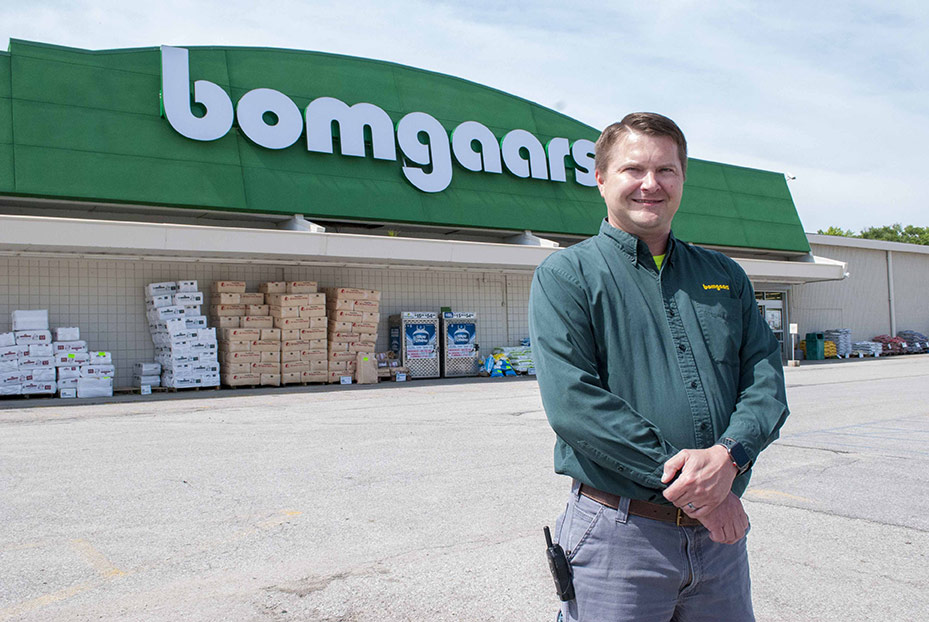 After it moved to the new location in September 2019, it didn’t take long for the Council Bluffs store to become an all-star performer. Sales in the new location are up 55 percent from the previous year, and the store has exceeded the monthly sales goal every month since opening.

The remodel included widening aisles, replacing some of the flooring and electrical and adding lighting for display cases. 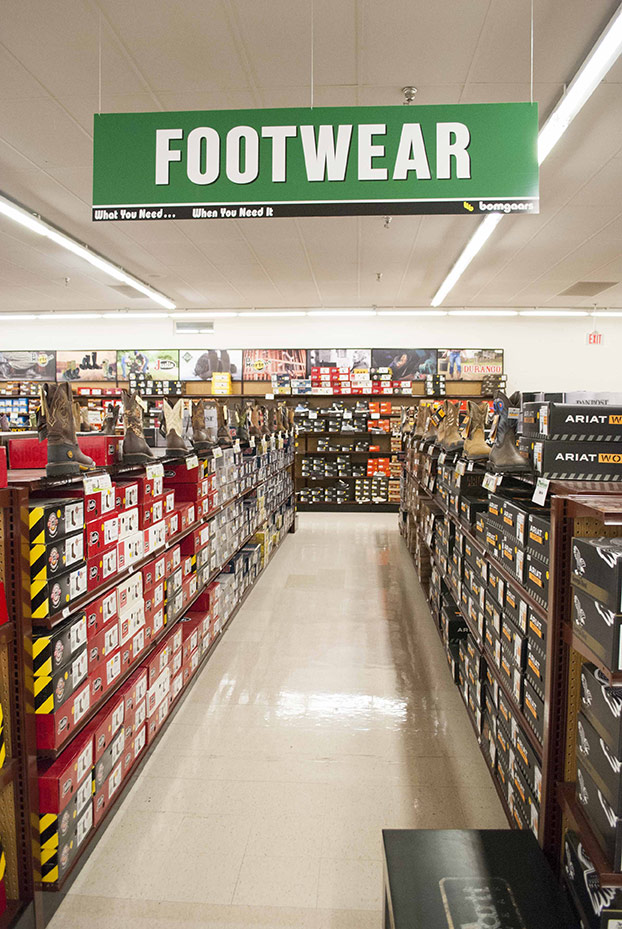 The already massive footwear department has proven so popular it will be undergoing further expansion.»

“Orgill has been a key partner in our success every single time our stores have expanded, relocated or improved in any manner,” says Joseph Puhalla, who has been the manager at Council Bluffs since August 2015. “Whenever we call on them to assist, they step up and provide relocation teams who set product in a quick turnaround. They also provide valuable input in designing our product planograms, while their Smart Start program has been crucial in opening new stores.” 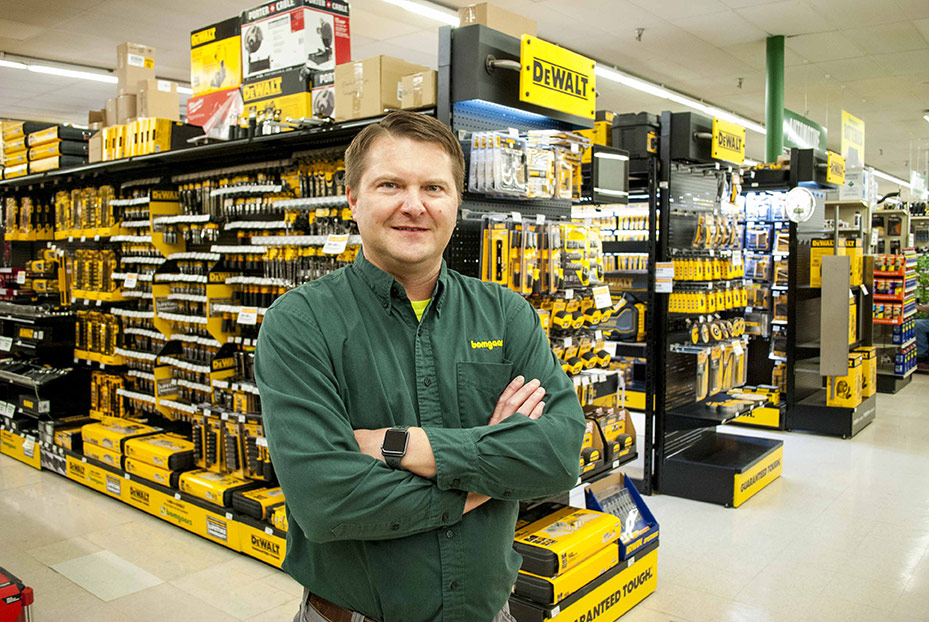 Five aisles are devoted to DeWalt products, turning the store into a destination for power tools and accessories.»

Fulfilling Bomgaars’ mission—to have what you need, when you need it, at the right price—the Council Bluffs store stocks products in major core categories, including electrical, plumbing, lawn and garden, tools, hardware and paint.

The store’s larger size means it can carry a wider assortment of products—customers can shop additional niche categories such as clothing and footwear, farm and ranch, pet, automotive, sporting goods, scrubs and medical wear, housewares and toys. They will also find more brands in departments like pet food and horse feed. 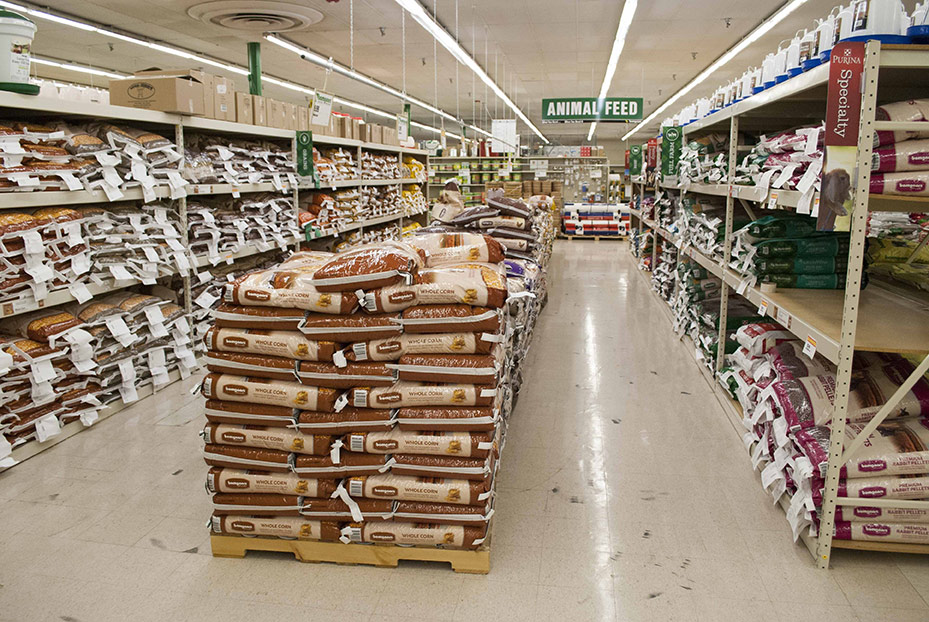 The core of the business is farm and ranch categories like animal feed.»

“The core of our business is farm and ranch,” Puhalla notes, adding that Council Bluffs is a heavy agricultural area with a great environment for raising livestock as well as field crops. It is also in a more urban demographic with about 62,000 residents and Omaha just across the river.

Promoting the store-within-a-store concept, this location has a large DeWalt store within the main store that occupies nearly five aisles. The DeWalt-branded signage, displays and endcaps used in this area make it clear to customers that Bomgaars is a go-to store for DeWalt tools and accessories. 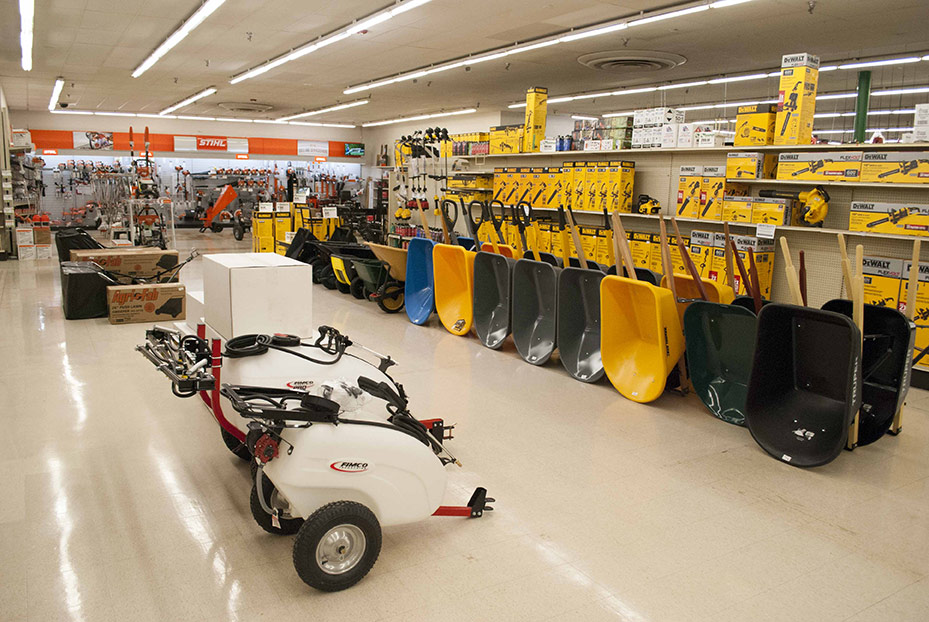 “Our employees are trained in DeWalt power tools, so customers know they can rely on them to answer their questions,” says Puhalla. “I think that’s a big thing that sets us apart across the other areas of the store, too; customers know our employees can help them find what they need quickly and accurately.”

The clothing area has a department store feel and is divided into different clothing shops dedicated to Carhartt, Dickies, Key and Ariat brands, with creative merchandising unique to each brand.

“We drastically expanded the clothing department. We have been able to add new brands and create a destination for footwear,” says Puhalla. “Every department in the store grew and the extra space has allowed better merchandising to promote the sales.” 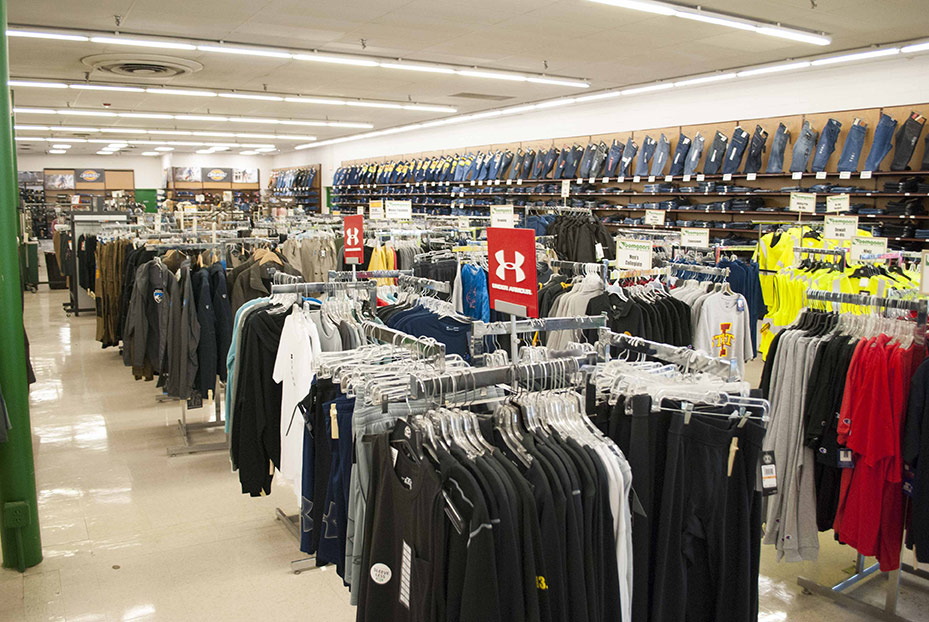 The clothing area has a department store feel and is divided into different clothing shops by brand.»

Inventive merchandising can be seen in other areas of the store as well. “We repurpose merchandise, like our galvanized feed troughs or stock tanks, and flip those over to use as displays,” adds Assistant Manager Steve Reiger. “They work well, look nice and show customers some of the products we carry.” 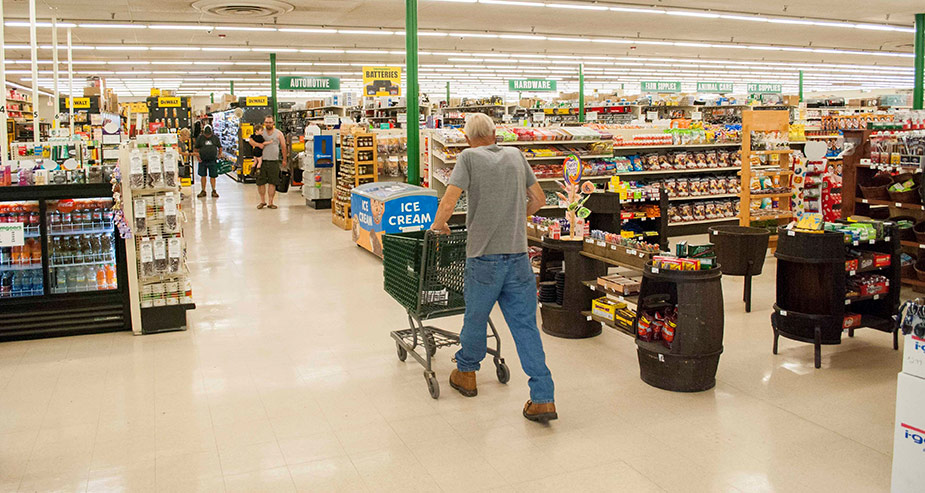 The 84,000-square-foot location is one of Bomgaars’ largest stores.»

They continue to tweak the assortments to better serve customers. “With the success of footwear, we are adding many new styles and this will require a major aisle shift to make the new space,” Puhalla points out.

So far, the community seems to really enjoy the new space. “They like being able to shop in a more organized store with more choices,” he adds. “Staffing, product availability and behavior have changed the way everybody does business and even expectations from customers and employees.”

A bigger store means more employees, and Council Bluffs now has 47 employees, which is about 20 more than before. “We try to use shadowing as much as possible to help them learn. As they learn, they are given more responsibilities,” says Puhalla. 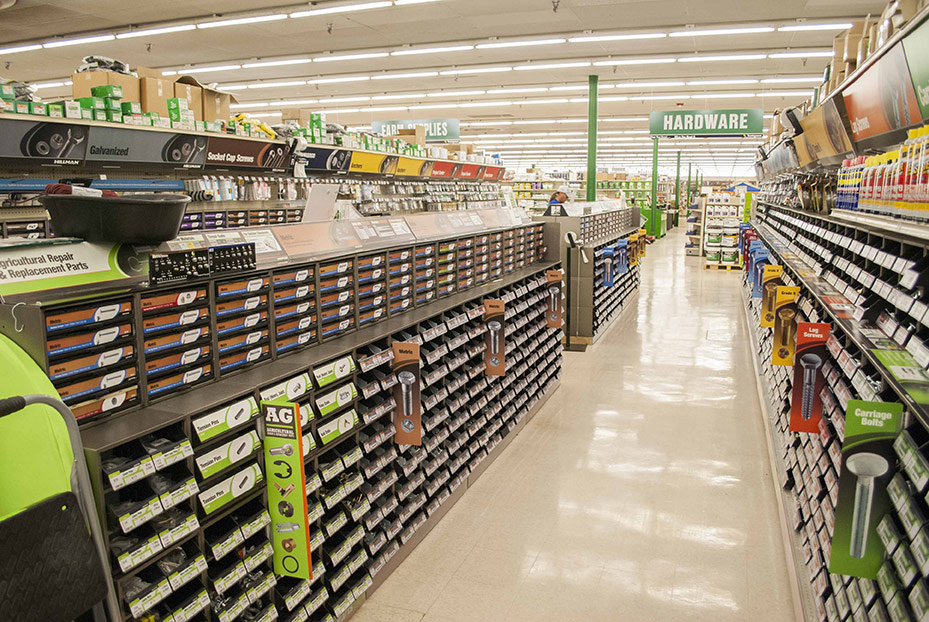 By more than doubling in size, the new Council Bluffs store has been able to expand greatly in categories like hardware.»

Bomgaars prides itself on having a positive impact in the communities it serves, and the Council Bluffs store is no exception. The store supports local organizations like 4-H and the National FFA Organization, and during its most recent ladies’ night event, it donated 5 percent of all sales from the evening to a local hospital’s women’s health program.

They host Bomgaars Show Clinic Tours, where customers can come in and learn about farm and animal topics like animal selection, showmanship, feed and management. In addition, the company supports past and current members of the military with social media posts and by selling military-related merchandise from the Chris Kyle Frog Foundation. 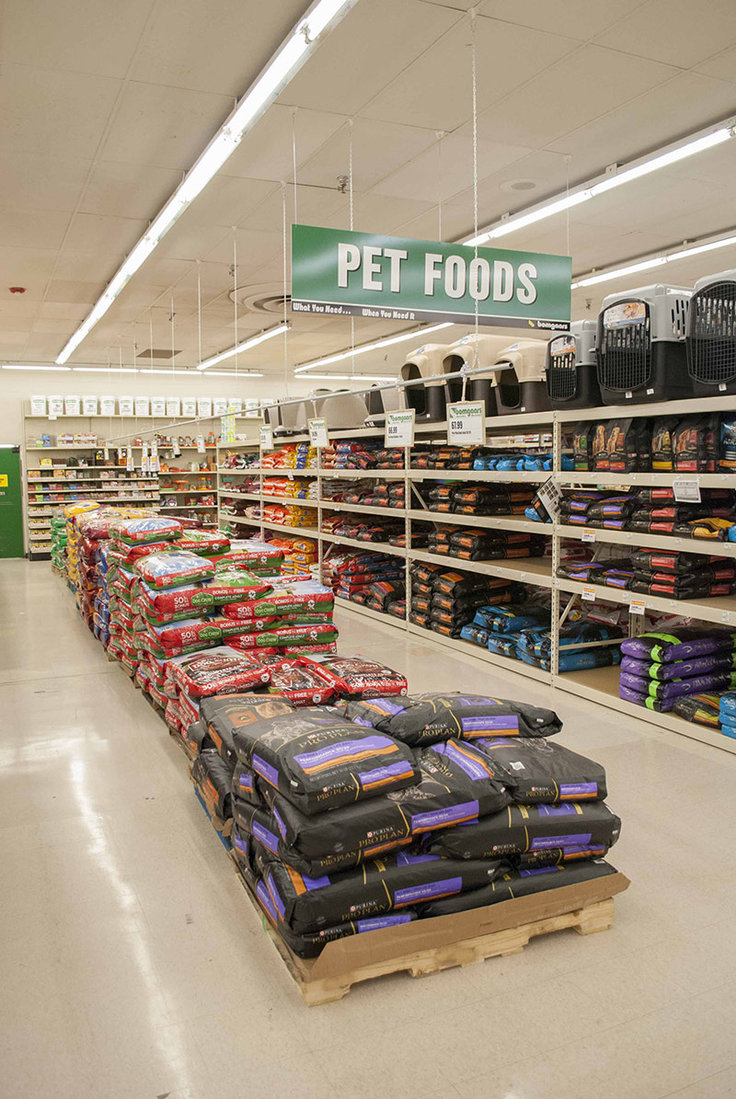 Pet food is one of the major niche categories.»

The Council Bluffs store is part of the growing Bomgaars company, which opened its 100th store in April and now has 107 stores in Colorado, Iowa, Idaho, Kansas, Minnesota, Nebraska, South Dakota and Wyoming.

The fourth-generation company, which is owned by Roger and Jane Bomgaars, began in Sioux City, Iowa in 1952, when Bill Bomgaars was one of four men to form the Mid-States buying group to pursue the farm fleet business.

“We grow by opportunity and recently have moved into several empty buildings in small-to-medium sized towns in the Midwest that were former Shopko stores,” says Torrey Wingert, vice president and chief financial officer for Bomgaars.

“It’s such a great honor to even be nominated for the Beacon Award, let alone win it. To be chosen for this is an extreme honor,” says Puhalla. “My crew works very hard for the success of this business with no expectation of this kind of recognition. I am glad to share this honor with them.”